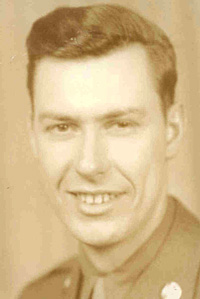 John R. "Jack" Keenan, 95, formerly of Ten Eyck St., Watertown, passed away Wednesday, March 4, 2015, at Samaritan Summit Village with his family by his side.

Calling hours will be held at Cummings Funeral Service, Inc., Watertown on Friday, March 6, from 4 - 7PM. The Funeral Mass will be celebrated at St. Patrick's Church at 10AM on Saturday, March 7, with Rev. Donald Robinson presiding. Burial will be at the convenience of the family.

Jack was born in Watertown on January 16, 1920, son of William M. and Lillian MacKenzie Keenan, and he graduated from Watertown High School in 1939. On November 8, 1952, he married Anne Elizabeth Riley at Our Lady of the Sacred Heart Church.

After high school Jack began his lifelong career at the NY Air Brake, initially as a toolmaker apprenticed to his father. In 1943 he joined the US Army Corps of Engineers, serving in the Philippines and New Guinea, and was honorably discharged as a Staff Sergeant. After serving his country, Jack resumed working at the NY Air Brake. He graduated from Clarkson University in 1954 with a degree in Mechanical Engineering. As a Design Engineer for the Air Brake, Jack was awarded numerous patents. He retired from "the shop" in 1990.

Jack was a communicant of St. Patrick's Church. He was a voracious reader with great appreciation for history, art, music, travel, and all things mechanical. He was devoted to his family and took great delight in his grandchildren.

Donations in Jack's name may be made to Flower Memorial Library, 229 Washington St., Watertown, NY 13601. Online condolences to Jack's family may be made at www.cummingsfuneral.com.