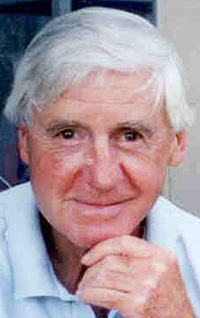 Calling Hours will be held at Cummings Funeral Service, Inc., Watertown on Friday, February 20, from 5 - 7PM. The Funeral Mass will be celebrated at Holy Family Church on Saturday, February 21, at 11AM with Rev. Steven Murray, pastor, presiding. Burial in Riverside Cemetery, Wellesley Island will be in the spring at a time and date to be announced.

Fred was born in Watertown on September 3, 1923, son of Clarence and Florence Sloan Kendall. He graduated from Watertown High School in 1941, from Cornell University in 1947, and from Syracuse University Law School.

On March 11, 1943 he entered the US Army Air Forces. He served in the southwest Pacific, New Guinea, and southern Philippines with the Radio Squadron and was an Enigma Cryptologist, helping to break the Japanese code. He received the American Service, Asiatic Pacific Service, Good Conduct and World War II Medals and the Philippine Liberation Ribbon. He was honorably discharged as a Staff Sergeant on February 8, 1946.

Fred began his career in the law in 1951 with Dunk, Conboy, McKay & Bachman Law Firm in Watertown. After 43 years at the law firm, he retired in 1993, with the current name being Conboy, McKay, Bachman & Kendall. He was a well known trial attorney in the North Country. He belonged to the American College of Trial Lawyers of North America, was a member and past President (1992) of the Jefferson County Bar Association, and from 1978 - 1982 he was a member of the House of Delegates through the NYS Bar Association. He was named to the Character and Fitness Committee in Syracuse.

Fred was a communicant of Holy Family Church. Throughout his life he was an avid boater, skier of both cross country and downhill, and played tennis, golf, and hockey. He was a member of the Black River Valley Club, Watertown Rotary, and the Watertown Racquet Club. The family summered in Thousand Island Park, Wellesley Island and he served on the Board of Directors for T. I. Park.

In lieu of flowers the family wishes donations in Mr. Kendall's name to the Alzheimer's Association of CNY, 441 W. Kirkpatrick St., Syracuse, NY 13204. Online condolences to his family may be made at www.cummingsfuneral.com