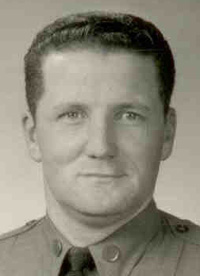 Al was a US Navy Frogman with the UDT (Underwater Demolition Team). He began his distinguished career in law enforcement with the NYC Police Dept. He then attended the NYS Troopers Academy and served as a NYS Trooper from 1956 - 1977. He was formerly married to Marcia J. Haller of LaFargeville. In 1977 he was elected the Jefferson County Sheriff and served the county until 1985. On December 2, 1988 he married Carolyn Walts Barton. He then became the Assistant Commissioner of the NYS Department of Corrections, retiring in 1992.

His passion was the St. Lawrence River and he enjoyed fishing, hunting, and collecting NYS Police memorabilia. But most importantly, Al enjoyed time with his family and friends.

In lieu of flowers, donations in Al's name may be made to either NYS Sheriff's Association Institute, Inc., attn. Sheriff's Summer Camp, 27 Elk St., Albany, NY 12207 or at www.sheriffsinstitute.org or to Thousand Islands Emergency Rescue Service (TIERS), PO Box 524, Clayton, NY 13624. Online condolences to his family may be made at www.cummingsfuneral.com