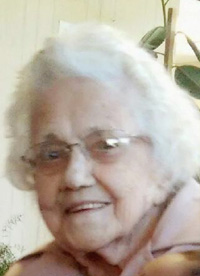 Ida was born in the town of Diana on October 5, 1920, the daughter of Charles A. and Lela B. Baker Arnold and she attended local schools. On December 21, 1940 she married David A. Robbins in the parsonage of the First Free Methodist Church, Carthage, and Mr. Robbins died October 28, 1988.

She was a homemaker and housekeeper. She was formerly a member of Free Methodist Church on Arsenal St., where she taught Sunday school for fourteen years, and was currently a member of Life Church of the Nazarene. One of her many enjoyments was crafting.

Calling Hours will be held at Cummings Funeral Service, Inc., Watertown on Friday, January 30, from 2 - 4PM. The Funeral Service will be at the funeral home on Saturday, January 31, at 10AM with Pastor Grace Govenettio, pastor of Life Church of the Nazarene, presiding and burial will follow in Brookside Cemetery.

Donations in her name may be made to Life Church of the Nazarene, 535 Thompson Blvd., Watertown, NY 13601. Online condolences to her family may be made at www.cummingsfuneral.com