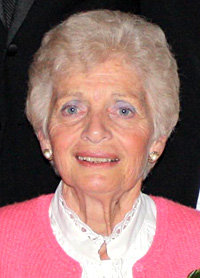 Calling Hours will be held at Cummings Funeral Service, Inc., Watertown on Sunday, January 25, from 2 - 5PM. A Prayer Service will be at the funeral home on Monday, January 26, at 10:15AM followed by the Funeral Mass celebrated at Holy Family Church at 11AM with Rev. Steven Murray, pastor, presiding. Burial will be in Glenwood Cemetery.

Mrs. Capone was born in Watertown on February 8, 1933, the daughter of Secondo "Fred" and Angelina Depoto Bocciolatt and she graduated from Watertown High School. She married Marion A. "Sonny" Capone on April 3, 1954 in the post chapel at Ft. Knox, KY with Rev. John S. Cunningham, Chaplain, officiating. Sonny died on October 24, 2005.

She was an operator for NY Telephone Co., worked, with her husband, at The Stable as a seamstress, and until her retirement, she worked in the deli at Great American. Theresa was a communicant of Holy Family Church. She enjoyed carpentry and was an accomplished cabinet maker. She enjoyed tennis and was a member of the Watertown Racquet Club. The family spent summers at Sherwins Bay on Pillar Point.

She is survived by her son and his wife, David C. and Linda Capone, Wilmington, DE; three daughters and their husbands, Susan M. and David G. Puccia and Sharon C. and Edward E. Brown, all of Watertown, and Linda A. and Peter M. Messina, Dexter; twelve grandchildren and fourteen great grandchildren; three sisters, Dorothy Dietterich, Carole and Dave Nims, and Loretta and Joseph Erdner, all of Watertown; and numerous nieces, nephews, and cousins. Besides her husband, Sonny, she was predeceased by three brothers, Francis, Robert, and Carmen Bocciolatt, and four sisters, Henrietta Biondolillo, Ann Marie Niewieroski, Rose Mary Inabinet, and Marceline Davis.

Donations in her name may be made to Holy Family Church, 129 Winthrop St., Watertown, NY 13601. Online condolences to her family may be made at www.cummingsfuneral.com