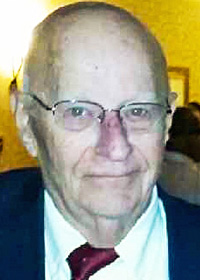 Calling Hours will be held at Cummings Funeral Service, Inc., Watertown on Friday, January 23, from 4 - 7PM. The Funeral Mass will be celebrated at Our Lady of the Sacred Heart Church, Watertown on Saturday, January 24, at 10AM with Rev. Jonas Tandayn, pastor, officiating. Burial will be in Dexter Cemetery.

Mr. Emerson was born in the town of Brownville on February 2, 1931, son of Fred and Edith Klock Emerson and he graduated from Dexter High School. After high school he entered the US Army in 1952 and served during the Korea War.

He was a self-employed mechanic until becoming parts manager for Garland City Auto Parts in Watertown and Lowville. He left there and was a supervisor for NY Airbrake. Richard returned to Garland City. In 1999 the couple moved to Rome and he delivered auto parts for NAPA.

He was a communicant of St. Peter's Catholic Church in Rome and a former member of Our Lady of the Sacred Heart Church in Watertown. Richard was a Past Commander of the Smith Savage American Legion Post 583, Dexter and he was also a member of the American Legion in Lee. His enjoyments included traveling, golfing, and hunting.

He is survived by his son and his wife, Mark R. and Karen Emerson, Watertown; three daughters and two sons-in-law, Jacqueline E. and Timi Gamble, Rome, Amy J. and Riley Blakley, Johnstown, and Sarah I. Eastup, Rome; nine grandchildren and one great granddaughter; and several nieces, nephews, and cousins. Besides his wife, Eloise, Richard was predeceased by his daughter, Lisa M. French, October 5, 2008, his grandson, David French, and his sister and her husband, Carol and Kilroy Youngs.

Donations in his name may be made to the American Heart Assoc. Founders Affiliate, PO Box 417005, Boston, MA 02241. Online condolences to his family may be made at www.cummingsfuneral.com