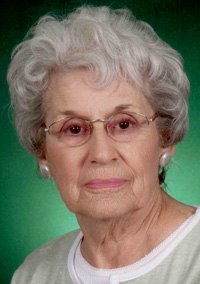 She was born May 25, 1926, daughter of Mary Crossman and Charles Morse in Watertown. She graduated from Watertown High School in 1944. She married Bruce E. Dempster in August 1948.

Rita was first employed at Agricultural Insurance Co., and then in the office of Atty. Clifton Landon. In 1969 she began her career at Mercy Hospital, retiring in 1990 as the billing supervisor in the business office after 22 years of service to the hospital. In retirement, she volunteered at the Office of the Aging as a MMAP Counselor and at Samaritan Medical Center. She was a member of the Children's Home Auxiliary.

A private memorial service will be held in St. Paul's Chapel at Trinity Episcopal Church at the convenience of the family. There will be no calling hours and arrangements are entrusted to Cummings Funeral Service, Inc., Watertown.

In lieu of flowers the family wishes donations in her name to Children's Home of Jefferson County, 1704 State St., Watertown, NY 13601. Online condolences to her family may be made at www.cummingsfuneral.com