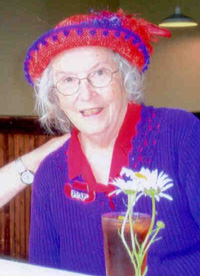 She was born on August 11, 1934, in New York City and attended the Ursuline Academy in New Rochelle, NY. She studied biology at Trinity College in Washington, DC, and for a year at the University of Kansas in Lawrence, Kansas, where she met the love of her life Kenneth Schwarz. They married on December 26th, 1955, at the Church of the Holy Family in New Rochelle and honeymooned in the Poconos of Pennsylvania. As the wife of an Air Force pilot they were stationed together at Air Force Bases in Malden, MO, Greenville, MS, and Sumter, SC. Departing the Air Force in 1958 and finding employment in the Petroleum Industry kept them in the south where they resided at various times in Lafayette, LA, Houston, TX, and New Orleans, LA. While in Lafayette, Pat earned her Bachelors of Science Degree in Biology from University of Southwestern Louisiana in Lafayette and her Masters in Genetics at Rice University in Houston. Following coursework at the Touro Infirmary and Charity Hospital in New Orleans she became a Registered Nurse. After a number of years in big cities in the Gulf Coast, she longed to return to a cooler climate with four seasons and they moved the family to a small farm in Westminster, MD, where Pat worked as an intensive care nurse in Sinai Hospital and Howard County General Hospital in Baltimore. The farm gave her the opportunity to begin a passionate pursuit of greenhouse flower growing and vegetable gardening. Working with four seasons kept her busy year round: planting, tilling, and propagating in the spring; watering and weeding during the summer; harvesting and canning in the fall; and studying seed catalogs and planning next season’s garden in the winter.

In 1974 she dreamed of creating a summer home for family and purchased property at the eastern end of Lake Ontario in Sackets Harbor, NY. Together, she and Ken designed and built “The Cottage by the Lake” where family has gathered every summer since. The joys of summer cottage life are now treasured by a new generation of family and grandchildren.

In 2000 she and Ken retired from employment and enjoyed the life of snowbirds, wintering in Redondo Beach, CA, and summering in Sackets Harbor. In 2003 they settled in a permanent residence in Sackets Harbor, setting roots in the community both literally and figuratively. Pat began her post-employment career sharing her green thumb in Sackets Harbor by creating “pocket flower gardens” around the community and planting her own vegetable garden, which provided the food pantry of Saint Andrews Catholic Church with fresh vegetables. The vegetables from her garden helped to feed those in need, while her flower gardens beautified the historic city--treating the eyes and feeding the souls of residents and visitors alike. She became involved with the America in Bloom organization, whose goal is to beautify urban landscapes with flowers. She brought national recognition to the community when Sackets Harbor was awarded first place in the America in Bloom competition in 2011.

She also travelled extensively enjoying vacation cruises to Mexico, Holland, Belgium, and the Canadian Maritimes; visiting botanical gardens in Buffalo, Philadelphia, and Colonial Williamsburg; and visiting grandchildren in California, Louisiana, Kansas, Georgia, and Virginia. She was active with the Watertown Red Hat Society and St. Andrews Altar and Rosary Society.

Pat believed in and fostered strong family ties, which drew her back to the North Country where she had deep roots and an abundance of family and relatives. Her goal in retirement was to settle in a small community where close friendships and community involvement were a fixed part of the lifestyle. Sackets Harbor was the perfect spot. The family will be forever grateful for the opportunities that the community of Sackets offered her to fulfill her goal.

Pat was predeceased by her parents Edward F. and Edna C. Cahill McFadden. She is survived by her loving husband Kenneth Schwarz, Sr., of Sackets Harbor, with whom she celebrated 59 years of marriage on December 26th, and a brother Edward “Ned” McFadden (Ginny) of Charlottesville, VA.

Additionally they have eight grandchildren and one great grandchild: Nicholas and Alberto Schwarz of Kennesaw, GA, and Mandeville, LA; Juliet and Hannah Schwarz of Williamsburg, VA; Brandon and Haley Rapp of Salina, KS; Connor and Cameron Schwarz of Huntington Beach, CA; and Aiden Umensetter of Kennesaw,GA.

Calling hours will be held at Cummings Funeral Service, Inc., Watertown on Monday, January 5, from 4 - 7PM. A prayer service will be at the funeral home on Tuesday, January 6, at 10AM followed by the funeral mass celebrated at St. Andrew’s Catholic Church in Sackets Harbor at 11AM with the Rev. J. Michael Gaffney officiating. Burial will be scheduled for a later date.

In lieu of flowers, memorial contributions may be made to the St. Andrew’s Food Pantry, 110 E. Main St., Sackets Harbor, NY 13685. Online condolences to her family may be made at www.cummingsfuneral.com