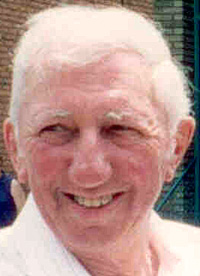 A Funeral Mass will be held on Friday, December 5, at 11AM at St. Mary's Church, Clayton with Rev. Arthur LaBaff, pastor, presiding with burial following in St. Mary's Cemetery with military honors provided by members of the Clayton American Legion. There will be no calling hours and arrangements are entrusted to Cummings Funeral Service, Inc., Clayton. The family will receive friends at 1PM Friday at the Knights of Columbus Hall, James St., Clayton.

Don was born in Clayton on October 19, 1924, the son of Luigi and Maria Tozzi Natali. He graduated from Clayton High School in 1941. After graduation he moved to San Francisco, CA and worked one year for Safeway. He returned to NY and attended RBI, Rochester in 1942.

He was inducted into the US Army May 29, 1943, serving in the South Philippines. He was wounded December 18, 1944 and he received a Purple Heart. Don also received the Bronze Star, the American Service, the Asiatic Pacific Service, Good Conduct and the World War II Victory Medals, and the Philippines Liberation Ribbon. He was discharged as a Technician 4th Grade January 19, 1946.

Don and his brother, Richard, purchased the former Hastings Place on Rt. 12 in 1946. They renamed it the C-Way Tourinn, specializing in homemade Italian family recipes. A new restaurant was built in 1954, later expanding with a motel and golf course.

Mr. Natali was a communicant of St. Mary's Church. He was a member of American Legion Colon-Couch Post 821 and Knights of Columbus Council 350, both in Clayton. He was an avid golfer and played in several golf leagues. He was also a member of VFW Post 1400 and Elks Lodge 496, both in Watertown.

Donations in his name may be made to St. Mary's Church, 521 James St., Clayton, NY 13624. Online condolences to his family may be made at www.cummingsfuneral.com.