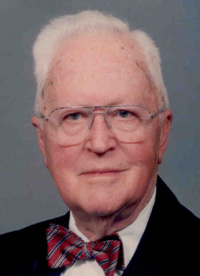 Calling hours will be held at Cummings Funeral Service, Inc., Watertown on Friday, September 26, from 2 - 4PM and 7 - 9PM. The funeral service will be celebrated at Trinity Episcopal Church on Saturday, September 27, at 11AM with Very Rev. John Crosswaite, rector of the River Churches, and Rev. Jennifer Kenna, assistant priest at Trinity Episcopal Church, co-officiating. Burial will be in Glenwood Cemetery.

Dr. Withington was born in Watertown on March 31, 1910, son of DeWitt and Martha Cooley Withington. He graduated from Adams High School, received his B. A. in Biology from Union college in 1932, and received his M. D. from Columbia University College of Physicians and Surgeons in 1936.

Dr. Withington entered the US Navy on July 31, 1942. He received the American Theater, Asiatic Pacific with one star, and Philippine LIberation with two stars medals, along with the Victory Ribbon. He was also a Bronze Star recipient. He was honorably discharged from active duty on December 22, 1945 and from the Reserves as a Lt. Commander on November 27, 1953.

For one year he practiced in Copenhagen, then began is medical career in Watertown in 1936, retiring in 1986. He was a member of the Medical Society of the State of New York, past president of Jefferson County Medical Society, and in 1993 he received the honor of being in Prevention Magazine as one of the ten best doctors in the U. S. He also received the North Country Citation from St. Lawrence University in 1978.

Into his 80's, he cross-country skied, receiving many skiing awards in his age group over the years. His picture was on the front of Parade of the Syracuse Post Standard, with him skiing and backpacking during the Blizzard of '77. Another enjoyment of his was boating. He and his wife, Alice, were widely known at Park Pool in Watertown, teaching generations to swim. He also enjoyed his Emmet Kelly routine at the annual Shriners Parade.

Online condolences to his family may be made at www.cummingsfuneral.com.