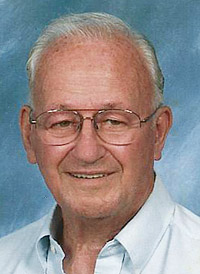 Calling hours will be at Cummings Funeral Service, Inc., Clayton on Thursday, September 18, from 4 - 7PM. The funeral service will be on Friday, September 19, at 11AM at the Depauville United Methodist Church with Pastor Donald Briant officiating and burial will follow in Depauville Cemetery.

Mr. Pickett was born in Watertown on June 11, 1929, son of William and Bertha Lane Pickett and he had attended Watertown schools. On September 22, 1948 he married Frances Jean Brigham in Watertown and she died October 17, 1998. He served in the US Army from July 8, 1948 until his discharge on September 16, 1949. While serving his country, one of his assignments was Japan.

For many years Gilbert drove truck, working for Upstate Trucking, Gorrea Trucking, and lastly for Deluxe Lines. He was a member of Depauville United Methodist Church, served as an usher, and enjoyed Wednesday morning prayer group. He also enjoyed camping, fishing, square dancing, and cheating at cards.