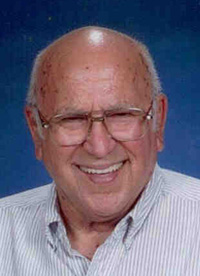 A funeral mass will be celebrated at St. Anthony's Church on Monday, September 22, at 11AM with Rev. Donald Robinson, pastor, officiating and entombment will follow at Glenwood Mausoleum. There will be no calling hours and arrangements are with Cummings Funeral Service, Inc., Watertown.

Mr. Carbone was born in Watertown on August 15, 1925, son of Natale and Antoinette Shucet Carbone. He graduated from Watertown High School in 1943. He also attended the National School of Meat Cutting in Toledo, OH.

After graduation, he entered the US Navy on August 10, 1943. He received the Victory and American Campaign Medals, the Pacific with four stars, and the Philippine Liberation with two stars. He was honorably discharged as a Seaman 1st Class on March 16, 1946.

For 55 years Toot was a grocier, meat cutter, and the co-owner of Carbone Bros. Market in Watertown, retiring in 1990. He was a communicant of St. Anthony's Church. He was a life member of Elks Lodge 496, a member of VFW Post 1400, American Legion Post 61, and the Northside Improvement League. Mr. Carbone enjoyed golfing, bowling, hunting, and softball, and when in his 60's, began playing hockey. One other sport that Carmen was passionate about was boxing and during his tour of duty in the Navy, he fought admirably in the amateur ranks and accrued a record of 40 wins and no losses in the 110 pound weight class. He was an expert at daily crossword puzzles and a serious Civil War aficionado, of which he had a vast collection of books and memorabilia.

In lieu of flowers, the family wishes donations in his name be made to either Hospice of Jefferson County, 1398 Gotham St. or St. Anthony's Church, 850 Arsenal St., both in Watertown, NY 13601. Online condolences to his family may be made at www.cummingsfuneral.com.