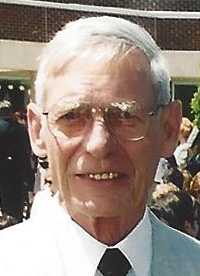 Clayton, NY resident, Peter M. Strouse, died on September 5, 2014, at the Samaritan Keep Home, in Watertown, NY. He had been a resident there since May 2014.

Peter Strouse was born on July 3, 1928 in Decatur, IL, to Milton and Bertha Strouse. His family, including his sister, Barbara, later moved to Gowanda, NY in 1938. Mr. Strouse graduated from Gowanda High School in 1946.

He entered Oswego State Teachers College in 1947 as an Industrial Arts Education major. He would briefly leave college to serve in the United States Army. Joining in 1950, he completed basic training and was trained as company armor. Mr. Strouse was sent to Korea for 18 months and there, he was reassigned as a forward observer directing fire for artillery, heavy mortars, and air support with the 180th Infantry Regiment of the 45th Division. Among numerous citations, he was awarded the Combat Infantry Badge. He was discharged as a sergeant in the fall of 1952. Following his release from service, Mr. Strouse returned to Oswego State in January 1953 and would receive a Bachelor of Arts in Education in June 1954. He later completed graduate coursework at St. Lawrence University.

Mr. Strouse taught Industrial Arts and Technical Drawing for 32 years, first at Clayton Central School and then, at Thousand Islands Central School. After retirement from teaching, Mr. Strouse continued to work as an independent contractor and for his son, Mike, on 801 housing projects and housing on Fort Drum.

It was in Clayton that he met Roberta Ann Howe. They would marry in 1955 at the United Methodist Church in Clayton, NY. They would have 5 children.

Mr. Strouse was an active member of his community. He was a past member of the Lions Club and Rotary Club. He was on the original committee that formed what is now the Thousand Islands Museum, which at the time included both the Craft School and the Antique Boat Museum. He was also instrumental in the construction of the facility in the Old Town Hall. Later, in 2001, as President of the board of the Thousand Islands Museum, he played a major role in the purchase and the move of the museum to its’ present location. In years past, Mr. Strouse worked part-time as the Executive Director of the Clayton Chamber of Commerce and created the format for the color directory, which is still in use today. He also worked closely with the Recreational Park Director to establish many events for the arena, many of which still persist. Due to his significant contributions and participation in community projects, his leadership qualities, and loyalty, in 1985, Mr. Strouse was honored as Clayton’s Citizen of the Year.

After retirement, Mr. Strouse developed a passion for model boat building. What began as a hobby, evolved into building, from scratch, commissioned replica model boats of area importance. From this interest, the Model Boat Show was created in 1998. In 2006, Mr. Strouse, upon request, constructed a model of Thomas Edison’s boat, the “Reliance”, which is currently on display at the Edison/Ford Museum in Fort Meyers, FL.

He was preceded in death by his parents, sister, Barbara Hailey, and daughter-in-law, Martha Potter Strouse.

Funeral Services for Mr. Strouse will be held on September 20, 2014 at 11:00 am, the Clayton United Methodist Church in Clayton, NY. Burial will be in Clayton Cemetery immediately following the service with military honors by the American Legion Colon-Couch Post 821 Honor Guard. Arrangements are with Cummings Funeral Service, Inc., Clayton.

Donations may be made to the Thousand Islands Emergency Rescue Service Inc., (Tiers) PO BOX 524, Clayton, NY 13624. Online condolences may be made at www.cummingsfuneral.com.