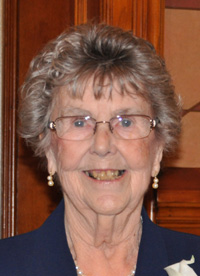 Mary Margaret Burns Kelly, 88, Winthrop St., Watertown passed away Thursday morning, September 4, 2014, at Samaritan Medical Center where she had been a patient since August 24.

Calling hours will be held at Cummings Funeral Service, Inc., Watertown on Sunday, September 7, from 2 - 5PM. A prayer service will be at the funeral home on Monday, September 8, at 10:15AM followed by a funeral mass celebrated at Holy Family Church at 11AM with Msgr. Paul E. Whitmore officiating. Burial will be in Glenwood Cemetery.

Mrs. Kelly was born in Watertown on May 19, 1926, daughter of John R. and Rosamond Butler Burns. She attended St. Patrick's School and graduated from Immaculate Heart Academy. She received her B. A. in Languages from Our Lady of Good Counsel College, White Plains, NY.

She was a teacher at Black River High School for several years. A communicant of Holy Family Church, Mary was a devout Catholic, a loving wife and mother. She was a member of Jefferson County College Woman's Club, the Red Hat Society and Gourmet Club, a volunteer at Holy Family School CCD program, as well as an avid bridge player. Her greatest joy in life was spending time with her husband and family, especially in the summer at their cottage in Sackets Harbor.

Contributions in her name may be made to Holy Family Church, 129 Winthrop St., Watertown, NY 13601. Online family condolences may be made at www.cummingsfuneral.com.

You are all in my thoughts and prayers. Your entire family holds a very special place in my heart for many summers' memories at the cottage. I am so sorry for the loss of your Mom.

My Dear Cousins,
My heart goes out to you all and your families. I have very fond memories of Aunt Mary ~ she always had a smile on her face. She lives on it all of you and all those who came in contact with her. Let's all dream about the wonderful reunion in heaven.
Peace and love to you all,
Mary Jane
Report to administrator
#11 Pattie Locy Mahler 2014-09-07 10:40
My husband and I offer the Kelly family our most heartfelt condolences on the passing of your Mother. You remain in our thoughts and prayers.
Report to administrator
#10 Ann Hull Dolan 2014-09-06 14:55
Ginny, Phyllis and Rosanne: I was saddened to read of Mary Margaret's death. I know my dad, Lyman, will happily welcome his cousin in Heaven. God bless you all!
Ann
Report to administrator
#9 William Massaro 2014-09-06 14:41
Sean, my heartfelt condolences on the loss of your Mom. Our thoughts and prayers are with you and your family.

Bill
Report to administrator
#8 Janet Givens 2014-09-06 08:18
Dear Erin and all the Kelly family~
I am so sorry to hear about your mother's passing. She was an amazing woman and always welcomed me into her home. Growing up with Erin, we had many adventures together on Winthrop Street and at the cottage. She was my mother's best friend and she will be sadly missed. I know that Mary is smiling her sweet smile now with her beloved husband, Joe. I hope that you remember all the happy years you had together and can find comfort in that. With love, Janet and family
Report to administrator
#7 Marjorie Brauer 2014-09-05 22:13
To all Magificent Seven Kellys&families ,my sincere condolences on losing Lady Mary. She tutored me in Latin in preparation for singing in Choral Society.She. along with other WHS Science teachers' wives helped us newcomers in 1963 to get acquainted at family get togethers.(espe cially at Vance Shores).We were from south Buffalo area.Always grateful. Blessings.
Report to administrator
#6 Roy and Shirley Smit 2014-09-05 19:01
Our thoughts and prayers are with all of you.. We loved your mom .She and I talked a lot about how our families grew up together in the summers at the cottages. We will miss her so much. She has a special place with God.
Report to administrator
#5 Gina and Bob Wells 2014-09-05 13:48
So sorry to hear of your mom's passing. Our thoughts and prayers are with you and your family at this sad time.
Report to administrator
#4 Neil J. Rowe 2014-09-05 09:59
Marty, Peggy, Kevin, Maureen, Seen, Erin and Mary
Ann: I am sorry for your loss. Your mother's warm and welcoming nature was an always and inspiration.
Report to administrator
12
Refresh comments list