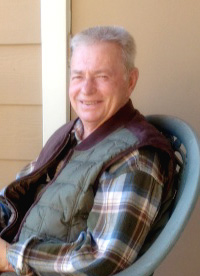 William "Bill" Turcotte, 69, passed away peacefully surrounded by family at Samaritan Medical Center after a battle with cancer on July 1, 2014.

Calling hours will be held at Cummings Funeral Service, Inc., Clayton on Sunday, July 6, from 2 - 5PM. The funeral mass will be celebrated at St. Mary's Church on Monday, July 7, at 11AM with burial in St. Mary's Cemetery.

Bill was born in Watertown on October 1, 1944, son of Donald I. and Ruth E. "Betty" Farrell Turcotte. He graduated from Clayton Central School in 1962 and attended Potsdam College.

He was married twice: the first to Ellen L. Bearup ended in friendship and his second marriage to Bethany Jackson Halladay was May 4, 1991. He worked thirty years for Niagara Mohawk, retiring as an electrical planner in 1994.

Along with his wife, Bethany, he is survived by his two daughters, Natali S. Curtis and husband, Mark S., and Nanette L. Zipadelli and husband, Gregory C., all of Mooresville, NC; he raised Bethany's two sons as if they were his own, Andrew J. Halladay and wife, Melanie, and Mathew J. Halladay and wife, Sherry, all of Watertown; nine grandchildren, Chelsi, Pete, Zachary, Nicholaus, Elwina Sophia, Dillen, Gianni, Jack, and Evelyn; two sisters, Catherine F. "Kay" Osadchey and husband, Thomas, Baldwinsville and Donna A. Williams and husband, Claude, Watertown; brother, Stephen J. Turcotte and wife, Amy, Clayton; and numerous nieces, nephews, and cousins.

Bill spent summers growing up working on Goose Island for the Dodge family. He spent many hours driving the "Wild Goose" back and forth from the mainland to the island. He developed an early love and respect for the water. He has taught many people, especially his children and grandchildren, the joy of fishing and hunting.

Bill was an amazing athlete, excelling in baseball, football, and wrestling in school. He remained an active member of his community through the Knights of Columbus, the Lion's Club, local golf and softball teams, and coaching his grandson's little league baseball. He was scouted by the NY Yankees and the Boston Red Sox baseball teams.

A well known north country artisan, his works can be found from local homes to the Presidential archives. For the last twenty-five years of his life, he was devoted to the 12-Step Program and found great joy impacting the lives of others.

Online condolences to Bill's family may be made at www.cummingsfuneral.com.