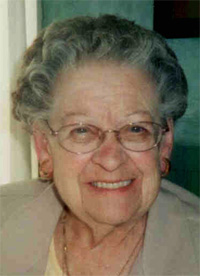 Calling hours will be at Cummings Funeral Service, Inc., Clayton on Wednesday, June 18, from 5 - 8PM. The funeral service will be at Christ Episcopal Church on Thursday, June 19, at 2PM with Rev. John Crosswaite officiating and burial will be in Grove Cemetery, LaFargeville.

Amy was born in the town of Clayton on October 12, 1916, daughter of Wilfrid and Nora Murdock Ellingworth and she attended LaFargeville High School.

Mrs. Mitchell was a homemaker and a member of Christ Episcopal Church. She was a life member and six-time Matron of the Ruhamah Chapter of the Order of the Eastern Star, LaFargeville. She was appointed and installed as Associate Grand Marshall of the Grand Chapter of NNY OES in 1974.

She was a member of the Home Bureau and a life member and trustee of the Agricultural Museum, Stone Mills. Amy was a Town of Orleans committee person. She was a past president of both the Orleans and Jefferson County Women's Republican Clubs.

Donations in her name may be made to Hospice & Palliative Care, 4277 Middle Settlement Rd., New Hartford, NY 13413 or to TIERS, PO Box 524, Clayton, NY 13624. Online condolences may be made at www.cummingsfuneral.com.