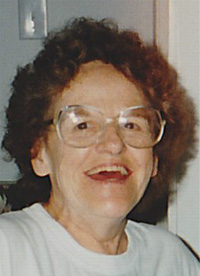 Joan A. Richey, 83, Olympic Apts., passed away Friday morning, June 13, 2014, at Hospice of Jefferson County at the Ellis Farm.

Her funeral mass will be celebrated on Thursday, June 19, at 11AM at Holy Family Church with Rev. Steven Murray officiating. Burial will follow in Glenwood Cemetery. Arrangements are with Cummings Funeral Service, Inc., Watertown.

Joan was born in Malone on September 26, 1930, daughter of Frank L. and Mary M. Maguire Richey. She was educated in Malone schools, the family moved to Watertown in 1944, and she then attended Immaculate Heart Academy.

She worked as an aide at Mercy Hospital, for the Board of Elections, and as a clerk for Byrne Dairy. She was the housekeeper and caregiver for Tom and Nancy Goodwin and their children for several years. Joan was a communicant of Holy Family Church, a member of its choir and church groups. She was a proud member of the Jefferson County Stroke Support Group.

She is survived by her daughter and her husband, Melissa M. and Ken Yott, Rochester, her granddaughter, Caroline Yott, her brother, Francis H. Richey, Kenmore, sister-in-law, June Richie, Watertown, and several nieces, nephews, and cousins and their families. She was predeceased by her three brothers, B. Michael Richie, Lawrence E. Richie, and Robert F. Richey, and her sister, Agnes C. Tennerella.

Donations in Joan's name may be made to Hospice of Jefferson County, 1398 Gotham St. or Holy Family Church, 129 Winthrop St., both in Watertown, NY 13601 or to American Heart Assoc./American Stroke Assoc., Founders Affiliate, PO Box 41705, Boston, MA 02241-7005. Online condolences may be made at www.cummingsfuneral.com.