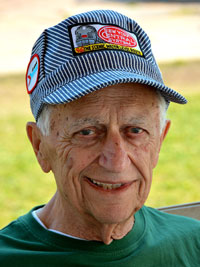 Calling hours will be held at Cummings Funeral Service, Inc., Clayton on Sunday, May 18, from 1 - 4PM. The funeral mass will be celebrated at St. Mary's Church on Monday, May 19, at 10AM with Rev. Arthur LaBaff, pastor, officiating. Burial will be held at a later date at the convenience of the family.

Mr. Natali was born in Clayton on August 31, 1928, son of Luigi and Marie Tozzi Natali. He graduated from Clayton High School and then entered the Merchant Marines during World War II, serving on the USS John A. Donald, a supply ship.

After the service he worked for the NY Central Railroad in several jobs, including maintenance on the outgoing trains, the truck gang, an assistant station clerk under Eddie Brower, and a traveling assistant agent. He then moved away from Clayton where he worked for Kraft Foods in CT, for Finast Co. in the meat dept., and for E. Rochester Piano Works. After moving back to Clayton he worked for 33 years in the warehouse and supply for Crowley Foods, LaFargeville.

Mr. Natali was a communicant of St. Mary's Church. He was a member of American Legion Colon-Couch Post 821 and Knights of Columbus Council 350, both in Clayton and Elks Lodge 496, Watertown. He played in various dance bands and enjoyed playing the drums. He was a railroad and train buff. He enjoyed people and helping at the C-Way Golf Course, working on fairways, and in Natali's Restaurant, bar-tending.

Donations in his name may be made to Hospice of Jefferson County, 1398 Gotham St., Watertown, NY 13601. Online family condolences may be made at www.cummingsfuneral.com.