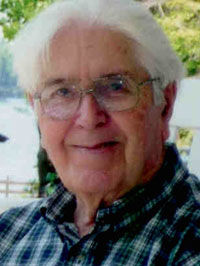 Calling hours will be held at Cummings Funeral Service, Inc., Watertown on Friday, April 25, from 2 - 4PM and 6 - 8PM. The funeral service will be at the funeral home on Saturday, April 26, at 1:30PM with Rev. Steven Murray, pastor of Holy Family Church, officiating. Burial will be at the convenience of the family in Indian River Cemetery.

Donald was born in the town of Perinton on November 25, 1924, son of Thomas J. and Elizabeth Hickey O'Sullivan. He graduated from Immaculate Heart Academy in 1942 and from the US Maritime Service Officer School, New London, CT in August 1945. He was discharged from the Merchant Marines as a Second Mate after serving for eleven years, and he received the North Atlantic and Mediterranean Middle Eastern Combat Ribbons.

He worked several jobs before beginning his twenty-year career with the US Post Office in Watertown.

He was a member of the Bedford Creek Golf Club and its Association, where he had a hole-in-one in 2000 and also had one in 1960 at the Saranac Lake Golf Course. Don was a member of the Sackets Harbor American Legion and a former member of Elks Lodge 496, Watertown. He was an avid NY Mets fan and Syracuse University sports fan.

Donations in Donald's name may be made to either the East Hounsfield Library, PO Box 664, Watertown, NY 13601 or to the Sackets Harbor Fire Dept., PO Box 171, Sackets Harbor, NY 13685. Online condolences to the family may be made at www.cummingsfuneral.com.