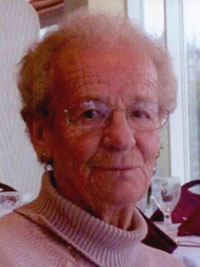 Calling hours will be held on Wednesday, April 16, from 4 - 7PM at Cummings Funeral Service, Inc., Watertown. The funeral will be on Thursday, April 17, at 11AM at the funeral home with Rev. Fred G. Garry officiating and burial will be in Brookside Cemetery.

Mrs. Phillips was born in Watertown on June 9, 1927, daughter of Kenneth and Beatrice Fisher Wilder, and she attended Watertown High School.

She married Vernon Phillips at Faith Chapel, Watertown on May 12, 1946 with Rev. Embrie officiating. Mr. Phillips, with Champion International for 35 years, died June 1, 1996.

Norma worked at Shaughnessy's Knitting Mill, as a cook at Greico's Brass Rail, and for Faichney's. She then worked for Young's Express, retiring as a bookkeeper after 30 years of service to the company.

She was a member of First Presbyterian Church and an avid Yankee fan.

She is survived by her three sons and their wives, Terry L. and Terry A., Robert A. and Karen E., and Kevin A. and Cathryn A., all of Watertown; daughter-in-law, Kathleen A. Phillips, Carthage; eleven grandchildren, three step grandchildren, nineteen great grandchildren, and two great great grandchildren; three brothers, Vernon Wilder, Watertown, Truman and Pamela Wilder, S. C., and Ronald and Joan Wilder, Chaumont; and numerous nieces, nephews, and cousins. Besides her husband, Vernon, she was predeceased by her son, Kenneth V., December 27, 2006, her sister, Delores Rogers Elmer, and her sister-in-law, Betty Wilder.

In lieu of flowers, the family wishes donations in her name to Hospice of Jefferson County, 1398 Gotham St., Watertown, NY 13601. Online condolences may be made at www.cummingsfuneral.com.