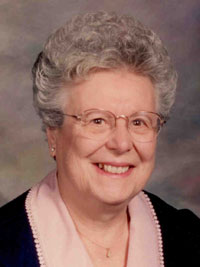 Mary J. Crescenzi, 99, of Watertown, passed away Friday afternoon, April 4, 2014, at Samaritan Summit Village, where she had resided for the last year.

Calling hours will be held at Cummings Funeral Service, Inc., Watertown on Monday, April 7, from 2 - 7PM. A prayer service will be at the funeral home on Tuesday, April 8, at 10:15AM followed by the funeral mass celebrated at St. Anthony's Church at 11AM with Rev. Donald Robinson officiating. Burial will be in Glenwood Cemetery.

Mrs. Crescenzi was born in Morolo, Italy on December 25, 1914, daughter of Dominic and Assunta Cicilea Morgia. The family moved to the US in 1920, and she attended both Boon St. and S. Junior schools.

She had worked as a seamstress at Olga Knitting Mill, and as a cook for Morgia's, Country Inn, and Dante's Restaurants. From 1962 - 1968 she partnered with Sam and Lillian Tufo at the State St. Restaurant, and also cooked in the rectory of St. Anthony's Church for several years.

Mary was a communicant of St. Anthony's Church and a life member of its Altar & Rosary Society. Her greatest enjoyment was her grandchildren and great grandchildren, and she also enjoyed crocheting, cooking, reading, and in her later years, traveling.

She is survived by her four daughters and their spouses, Agnes and Arthur Zaremba, Sylvia and John Rositano, and Eileen and Wendell Pierce, all of Watertown and Linda and Michael Renzi, Sackets Harbor; 21 grandchildren, 50 great grandchildren, and 12 great great grandchildren; her brother and his wife, John and Rosalind Morgia, Watertown; three sisters, Angelina "Angie" Mathieu and Agnes "Aggie" Natali, both of Watertown, and Pauline DiStefano and husband, Arfie, Utica; two sisters-in-law, Jean Morgia, Watertown and Gloria Morgia, Utica; brother-in-law, Sam Tufo, Watertown; and numerous nieces, nephews, and cousins. Besides her husband, Angelo, she was predeceased by her son and his wife, Richard and Shirley Crescenzi, two brothers, Joseph and Egidio Morgia, and four sisters, Lillian Tufo, Philomena "Fannie" Balderson, Alta Fiorentino, and Lena Attili.

Donations in her name may be made to either St. Anthony's Church, 850 Arsenal St. or Sisters of the Precious Blood, 400 Pratt St., both in Watertown, NY 13601. Online condolences to Mary's family may be made at www.cummingsfuneral.com.