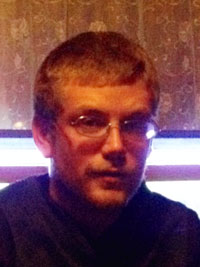 Calling hours will be held at Cummings Funeral Service, Inc., 320 John St., Clayton on Saturday, March 29, 2014, from 1:30 - 3:30PM. The funeral service will follow at the funeral home at 4PM with Rev. Jeff McIlrath, of Reformed Church of the 1000 Isles, officiating. The family requests that friends and family wear blue and/or orange in honor of Jesse, not black.

Jesse, known as "Farmer Jesus" to his friends, was born in Watertown on September 9, 1988, the son of John Chase and Sharon Grant-Wine. He was a farm manager for Thompson Farms in Evans Mills.

He loved farming and all it entailed. He was looking forward to hunting and enjoyed fishing. Jesse also enjoyed welding, drawing, shopping, traveling, orange and blue sports cars, and making music with his sister, Denise. For several years he was a peace officer for NYRA. He loved and adored his daughter, Serenity - she was his princess, and he also loved to spend time with his nieces and nephews.

In lieu of flowers, donations for his daughter may be sent to Citizen's Bank of Cape Vincent, for the benefit of Jesse M. Chase, NYS Rt. 12E, Chaumont, NY 13622. Online condolences to the family may be made at www.cummingsfuneral.com.