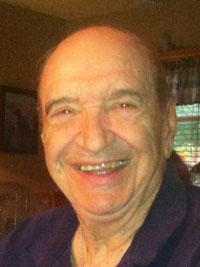 Calling hours will be held at Cummings Funeral Service, Inc., Clayton on Wednesday, February 12, from 4 - 7PM. The funeral mass will be celebrated at St. Mary's Church on Thursday, February 13, at 11AM with Rev. Arthur LaBaff officiating and burial will be in St. Mary's Cemetery.

George was born in Clayton on June 10, 1936, the son of Ray M. S. and Anna Hlavka Leavery, and he graduated from Clayton Central School in 1953. He married Dianne C. Natali on July 13, 1957 at St. Mary's Church with Rev. George E. Racette officiating.

He actively served in the US Navy from 1955 to 1958, and he retired from the Naval Reserves in 1984 as a Senior Chief Petty Officer.

After his active service, he began his career with NYS Dept. of Transportation, retiring April 19, 1995 as a Supervisor.

Donations in his name may be made to either St. Mary's Church, 521 James St., Clayton, NY 13624 or SPCA of Jefferson County, 25056 Water St., Watertown, NY 13601. Online condolences to his family may be made at www.cummingsfuneral.com.