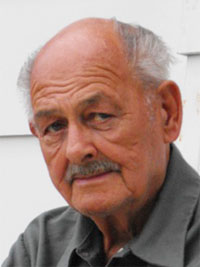 Calling hours will be on Sunday, February 2, at Cummings Funeral Service, Inc., Watertown from 1 - 3PM. The funeral service will be held at the funeral home on Monday, February 3, at 3PM and burial in Brookside Cemetery will be in the spring.

William was born in Theresa on March 16, 1926, son of Norman and Dorothy Frasier Calhoun.

He entered the US Army on July 10, 1944 and served with the 331st Field Artillery Battalion, 86th Division. He received the Asiatic Pacific Campaign, Good Conduct, and World War II Victory Medals and the Philippines Liberation Ribbon. On August 20, 1946 he was honorably discharged as a Staff Sergeant.

Bill was a service manager for Mode's Supply and had driven trucks for several companies, including Lettiere Construction and Marcinko Trucking. He enjoyed building remote control airplanes, tinkering and fixing things in his garage, and gardening.

He is survived by his five children, William and Laurie Calhoun, Jr. and Kathy and Denny Wyeth, all of Watertown, and Stephen and Susan Calhoun and Nancy Calhoun and her companion, Walter Carr, all of LaFargeville, and Alan Calhoun, Dexter; eight grandchildren and twelve great grandchildren; sister, Ada Kubacki, Milwaukee, WI; and several nieces, nephews, and cousins. Besides his wife, Patricia, he was predeceased by a grandson, Michael Calhoun, a great grandson, Cameron Calhoun, two brothers, Charles and Merton Calhoun, and three sisters, Doris Calhoun, Betty Livingston, and Vivian DeJourden.

Online condolences to the family may be made at www.cummingsfuneral.com.