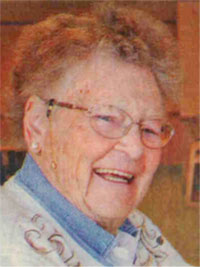 Calling hours will be at Cummings Funeral Service, Inc., Clayton on Wednesday, January 29, from 4 - 7PM. The funeral mass will be celebrated at St. Mary's Church, Clayton on Thursday, January 30, at 11AM with Rev. Pierre Aubin officiating. Burial in Grindstone Island Cemetery will be at a time and date to be announced.

She had worked as a clerk at River Rat Cheese Store, Clayton and at Sea Mist Marina, Boynton Beach, FL, where she and her husband had wintered.

Mary Elizabeth was a communicant of St. Mary's Church, taught religious education classes, and sang at many funerals. She was also a member of the Community Choir. She was a member of both the Knights of Columbus and American Legion Auxiliaries, and had been a Girl Scout Leader and on the Voting Board.

With Bernice Wagner, she was co-founder of Clayton Meals on Wheels program. She enjoyed sewing, gardening, singing, Bingo, boating, and was the River Mail Boat operator for several years. She especially enjoyed her afternoons socializing at the Clayton Subway.

In lieu of flowers, please make donations in her name to St. Mary's Church, 521 James St., Clayton, NY 13624. Online condolences to the family may be made at www.cummingsfuneral.com.