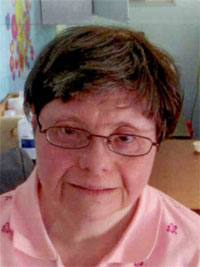 Jean Marie Thurheimer passed away on Friday, December 13, 2013 due to a number of health conditions.

Jean was born May 20, 1956, the daughter of Herbert C. and Mary Louise Thurheimer, in Watertown, NY. Despite being born with Down's Syndrome, she attended school in Watertown until the age of 21. She received a Graduation Certificate from the Watertown City School District in 1977.

After graduation she went to work at the JRC workshop, Production Unlimited. She continued there until 2010 performing many tasks, and training to live on her own which was one of her dreams.

After the passing of her mother, Louise, in 2000, Jean became part of the JRC family. She resided in a JRC residence at 127 Ten Eyck St. until 2011. After being diagnosed with Alzheimer's Disease, she moved to a Specialized Care Home at 803 Holcomb St. She continued to reside there until her passing, under the care of the JRC staff and Hospice of Jefferson County. Jean's family would like to commend and thank JRC for all the years of loving care she received at both the Ten Eyck St. and Holcomb St. houses.

Jean could brighten a room with her infectious grin and her love of hugging any and all. She always loved music and had an uncanny ability to name almost any song and performer after only a few notes. She also loved to dance or ROCK OUT, as she called it. Her favorite was Barry Manilow.

Jean is survived by her sisters, Judy Jamieson, Farmville, VA, Janet Foote, Florida, Joanne Mastacusa, Liverpool, NY, and Jill Swank, Watertown, NY. She is also survived by her brothers, Dean and Donald Thurheimer, both of Adams Center, NY. Jean had 23 nieces and nephews, 25 grand nieces and nephews, and 2 great grand nephews. Her father, Herbert, passed in 1957 and her oldest brother, David, passed away in 1989.

Calling hours will be at Cummings Funeral Service, Inc., Watertown on Monday, December 16, from 4 - 7PM. A prayer service will be held at the funeral home on Tuesday, December 17, at 11AM with Rev. Steven Murray, of Holy Family Church, officiating with burial following in Glenwood Cemetery.

Donations in Jean's name may be made to JRC, 380 Gaffney Dr. or Hospice of Jefferson County, 1398, Gotham St., both in Watertown, NY 13601. Online condolences to the family may be made at www.cummingsfuneral.com.