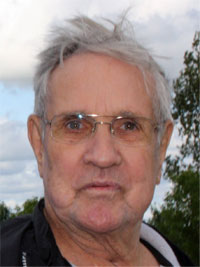 Calling hours will be held at Cummings Funeral Service, Inc., Watertown on Friday, November 22, from 3 - 5PM and 7 - 9PM. The funeral service will be Saturday, November 23, at 10AM at Cornerstone Family Worship Center, 231 S. Massey St., Watertown with Rev. Warren C. Day officiating followed by burial with military honors in Sackets Harbor Military Cemetery.

George was born in Rochester on August 31, 1929, son of George and Gladys Youngs Hoistion. He had been married to Jeannie Hodge and Mary Bresett.

On May 31, 1970 he retired from the US Marine Corps as a Gunnery Sergeant after 23 years of service to his country. During his tenure he served in Hawaii, Korea, and Vietnam and as a drill instructor at Camp Pendleton. He received numerous decorations, including the Purple Heart, Navy Occupation and Combat Action Ribbons, World War II Victory and National Defense Service Medals, Vietnamese Cross of Gallantry, Vietnamese Service Medal with four battle stars, Vietnamese Campaign Medal with device, Presidential Unit and Meritorious Unit Citations, and the Good Conduct Medal several times. He served in the Reserves for 7 years after his retirement from active duty. After his service he was Highway Superintendent for the Town of Pamelia for 17 years.

After his retirement from the Town of Pamelia, he owned and operated George's guns for several years. George enjoyed building and flying model airplanes, coin collecting, reading, old western movies, and cowboy shoots and reenactments. George had a special love for his dogs, Harley and Dakota. He was a member of American Legion Post 61, a lifetime member of the Marine Corps League, and a former member of the VFW Post 1400, all in Watertown. He was also a member of the Jefferson County Highway Superintendent Assoc.

Donations in his name may be made to Hospice of Jefferson County, 1398 Gotham St. or Marine Corps League, PO Box 6421, both in Watertown, NY 13601 or American Cancer Society, PO Box 7, E. Syracuse, NY 13057. Online condolences may be made to his family at www.cummingsfuneral.com.