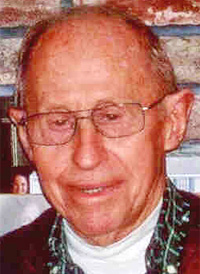 Lawrence C. "Larry" Stumpf, 89, passed away peacefully at his home in Dexter on Thursday, November 14, 2013 with his loved ones at his side.

Calling hours will be held on  Monday, November 18, from 4 - 7PM at Cummings Funeral Service, Inc., Watertown. A prayer service will be at the funeral home on Tuesday, November 19, at 10:15AM followed by the funeral mass celebrated at Holy Family Church at 11AM. Burial will be in Glenwood Cemetery.

Mr. Stumpf was born in Rosiere on November 11, 1924, son of Charles E. and Minnie Louise Robbins Stumpf and he graduated from Cape Vincent High School.

On April 30, 1946 he entered the US Army. He received the World War II Victory Medal and the Army of Occupation Medal, Japan, and was honorably discharged on September 26, 1947.

In 1948 he began his career with A. Friedrich Construction, working as a labor foreman. The company worked on Watertown High School, House of the Good Samaritan, and Sears. In 1962 and began his own business, Larry C. Stumpf Construction, and retired in 1988.

He was a communicant of Immaculate Conception Church, Brownville and was a member of the American Legion Post 583, Dexter. He was a Town of Lyme Councilman for twenty years. He was chief of the Three Mile Bay Fire Dept. for ten years and was chairman of the building committee for the new fire station built in 1968 - 1969. In 1988 the couple moved to the Brownville area, and Larry was acting chairman of the committee to construct the water line for District 1, which was completed in 2003. He loved to travel, and the couple wintered from 1981 - 1993 in Zephyrhills, FL, where he was a member of Betmar Acres. Along with his sons, Larry was a devoted fan of the Detroit Tigers and SU basketball.