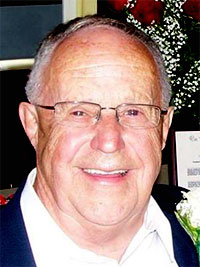 Calling hours will be held at Cummings Funeral Service, Inc., Clayton on Sunday, November 3, from 2 - 5PM. On Monday, November 4, he will lie in state at St. Vincent dePaul's Church, Rosiere from 9 - 10:30AM followed by the funeral mass celebrated at 11AM with Bishop Terry Lavalle officiating. Burial in Glenwood Cemetery, Watertown will be at the convenience of the family.

Deacon Ruddy was born in Potsdam on August 30, 1939, son of John V. and Frances L. Brady Ruddy. He graduated from Canton Central High School in 1957 and attended both LeMoyne College and Canton ATC.

On September 17, 1960 he married Judith Bartman at St. Mary's Church in Canton with Fr. James J. Ruddy, his brother, officiating.

He worked over ten years for UPS as a delivery driver, supervisor, and manager. In 1972 he began working with his father-in-law at Bartman's Auto Parts, Canton, taking over as manager and owner after Mr. Bartman retired. In 1988 he became parts manager in sales and service for Rupp Rental, Watertown. He joined the Deaconate in September 1996. Robert was ordained a Deacon on October 9, 1999, serving the Catholic communities in northern Jefferson County. In 2001, after retiring from Rupp Rental, he became a Chaplain for NYS Dept. of Corrections and worked in Cape Vincent Correctional Facility until his retirement in August 2013. During this time, he also served the Catholic communities in Cape Vincent, Rosiere, and Chaumont.

Deacon Ruddy was a 4th Degree Knights of Columbus, LeRay de Chaumont Chapter and was a member of the Lions Club in Cape Vincent. He was a former member of the Ancient Order of Hibernians and the Canton Fire Dept., which he served for 22 years. He was an avid hunter, enjoyed riding his Spyder with his wife, and especially enjoyed spending time with his family and his dog, Gizmo.

Besides his wife, Judy, he is survived by his three children and their spouses, Michelle R. and Terry Conant, Canton, M. Peter and Sandra Ruddy, Rochester, and Patrick J. and Leslie Ruddy, W. Union, WV and his seven grandchildren. He was predeceased by his two brothers, Neil B. Ruddy, October 9, 1941 and Msgr. James J. Ruddy, November 2, 1987.

Donations in Deacon Ruddy's name may be made to the National Down Syndrome Society at www.ndss.org or 666 Broadway, 8th Floor, NY, NY 10012, the Richard E. Winters Cancer Center, 5 Lyons Place, Ogdensburg, NY 13669, or to a charity of your choice. Online condolences to the family may be made at www.cummingsfuneral.com.