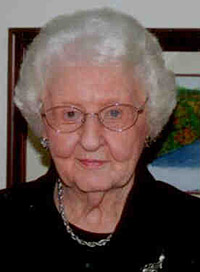 Mary H. LaFave, 95, a resident of Centenial Apartments since 1999, died Monday afternoon August 27 at her home.  The Funeral Mass will be held on Friday August 31 at 10:00 am  at Holy Family Church with Rev. Steven Murray officiating with burial  following at St. Mary's Cemetery in Copenhagen N.Y.. Calling hours will be held Thursday August 30 at the Cummings Funeral Service, Inc. from 4:00 to 6:00 pm.  In lieu of flowers the family requests donations be made to Hospice of Jefferson County 1398 Gotham Street, Watertown, N.Y. 13601.

Born on November 2, 1916, in Copenhagen,  the daughter of R. J. and Harriet Sheridan Horan, she graduated from Copenhagen High School and attended Hepburn School of Nursing in Ogdensburg.  She married Glenn E. LaFave on April 25, 1936 at St. Mary's Rectory in Copenhagen.  Mr. LaFave died on Janurary 14, 1995.  The couple had moved to Watertown in 1940, where she was a homemaker and had worked at The Boy's and Men's Speciality Shop for a number of years.

A communicant of Holy Family Church since 1940, and a former member of the Mercy Hospital Auxillary and the Columbiettes Auxillary.  She had been an Inspector for the Board of Elections, a Samaritan Keep Volunteer and a member of the Legion of Mary Ladies Auxillary.  She is survived by her two daughters, Jean L. Uderitz and her husband Richard A. of Pennslyvannia and Joan A. Gravelle of New York . She is  also survived by 7 grandchildren and 17 greatgrandchildren, 2 neices, 1 nephew and cousins.  She is predeceased by her 2 sisters, Ruth Thompson and Cora Cotter.