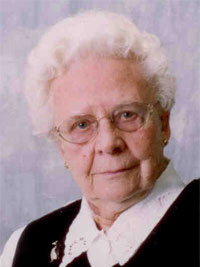 She was born on May 17, 1915, in Potsdam, the daughter of Wilbert and Anne Madsen LaGraff. She graduated from Potsdam High School and Potsdam Normal School, and in 1939, she received a nursing degree from Columbia Presbyterian Medical Center in New York City.

Virginia married Dr. Charles F. Goodnough of Watertown in July 1940, just a week after he was ordered to active duty in World War II. She spent the war years with her parents in Potsdam while her husband was in service. Her younger brother, Arnold LaGraff, was Potsdam ’s first casualty in the war, when the plane he was piloting crashed into the Atlantic Ocean in April 1942.

Charlie and Virginia settled in Watertown in 1944, when Charlie returned from the war and started a medical practice. Virginia raised six children and volunteered at Mercy and Samaritan hospitals and the Samaritan Keep Home. She was a member of Holy Family Church , and more recently, St. Patrick’s Church in Watertown.

For decades, the Goodnoughs spent summers at their cottage at Campbells Point in Sackets Harbor , the source of many happy memories.

Virginia was gifted at sewing, one year whipping up a Robin Hood costume for one grandchild and a Christmas tree costume for another at Halloween because she happened to have an excess of green felt. Well into her 90s, she was also a skilled bridge player, an avid reader and a passionate baseball fan, closely following her beloved New York Yankees. Her family and friends loved her intelligence, creativity and quick sense of humor. For her grandchildren, well into their adult years, there was no finer treat than her homemade fudge.

A graveside service will be held at Brookside Cemetery , town of Watertown, next Friday, October 11, at 11AM with Rev. Donald Robinson officiating. There will be no calling hours and arrangements are with Cummings Funeral Service, Inc., Watertown.

Donations in her name may be made to Hospice of Jefferson County, 1398 Gotham St., Watertown, NY 13601. Online condolences to the family may be made at www.cummingsfuneral.com.