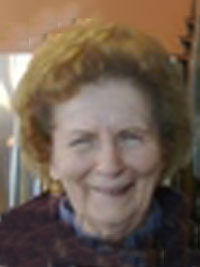 Victoria Marie Zaremba Cecil, 86 from the Town of Brownville peacefully passed away at her home with her daughter Mari, daughter-in-law Cindy and caregiver Sarah.

Victoria was born in Wolcott, New York on August 1, 1927, the daughter of Stanley E. and Pauline (Bedish) Zaremba, Sr. She graduated from Augustinian Academy in 1945 then relocated to Miami, FL where she married Dale L. Cecil on October 8, 1953.

Victoria was a communicant of Our Lady of the Lakes Catholic Church and School until she returned to Watertown, New York, where she became a communicant of Immaculate Conception Church in Brownville. Victoria found peace and joy in her rosary and daily prayers. She also found joy in her faithful canine companion Pee Wee and her grand-dogs Jazzie and Tango.

Victoria enjoyed her Friday lunches with her niece Bonnie and their Friday afternoons at the hair dresser (Sally Shepard). She enjoyed reading, visiting with friends and relatives, as well as playing cards with her “girls” Sarah M., Heidi B., Heidi O., Tara L., and Robin T.

Donations in Victoria’s name may be made to Hospice of Jefferson County, Jefferson Rehabilitation Center, Watertown, NY or Immaculate Conception Church in Brownville, NY. Online condolences may be made at www.cummingsfuneral.com.