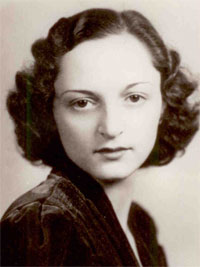 Calling hours will be held at Cummings Funeral Service, Inc., Watertown on Sunday, September 15, from 2 - 7p.m.. A prayer service will be at the funeral home on Monday, September 16, at 12:15p.m. followed by the funeral mass celebrated at St. Anthony's Church at 1p.m. with Rev. Donald Robinson officiating. Burial will be in Glenwood Cemetery.

Mrs. Galluccio was born in Watertown on March 22, 1920, daughter of Gaetano and Ida Nagni Spaziani and attended Watertown schools.

She had worked as a clerk at JC Penney's, with her husband at Galluccio's Breen Ave. Market, Fachiney's (Cheeseboro Ponds), Dairy Queen, and Ponderosa. Theresa was a communicant of St. Anthony's Church and a former member of its Altar & Rosary Society. She was well known throughout the area for her wedding cakes and Italian cookies, and enjoyed crafts, especially crocheting and tatting.

Besides her husband Hugo of 35 years who died July 22, 1974, she was predeceased by her daughter-in-law, Sharon L. Jones Galluccio, her six brothers: Jerry, Silverio "Chet", Frank "Kako", Vincent, Peter, and Henry Spaziani, two sisters: Anna Cummoletti and Josephine Marcinko, and two siblings who died as infants, Lucy and Salvina.

Donations in her name may be made to Samaritan Keep Home Activities Fund, 133 Pratt St., Watertown, NY 13601. Online family condolences may be made at www.cummingsfuneral.com.