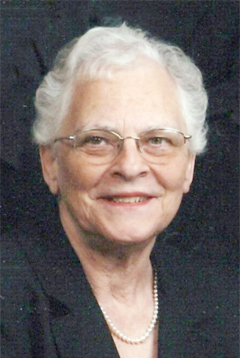 Mrs. Grant was born on January 2, 1937, the daughter of William L. and June (Giltz) Graves, in Watertown, NY. She graduated as valedictorian from LaFargeville Central School in 1954 and from Watertown School of Commerce in 1955. She completed additional business and accounting classes through Jefferson Community College and Empire State College. From 1981 to 1997, she was bookkeeper at James P Kennedy Pharmacy, Clayton, and, from 1978 to 2004, she was self-employed as a bookkeeper and income tax practitioner. She was enrolled to represent taxpayers before the IRS. She also helped on the family dairy farm.

On November 30, 1957, she married Daniel L. Grant at St. Paul's Episcopal Church, LaFargeville, NY, with the Rev. Arthur Harrington, rector, officiating. Attendants were Ann Graves Castle, sister of the bride, and Lewis Hutcheon. After her marriage, she moved to the family dairy farm in Clayton, where she raised her family and helped in the day-to-day operations of the farm. Whether cooking meals, tending a garden, canning vegetables, unloading a load of hay, or dealing with three boys she was always busy.

Besides her parents, she is predeceased by a granddaughter Jessica L. Grant.

A memorial service will be held at 11:00 AM on Saturday, November 19, at Christ Episcopal Church, 235 John St, Clayton, NY with the Rev Lisa Busby officiating. Burial will be at the Clayton Cemetery.

Memorial contributions may be made to Hawn Memorial Library, Clayton Volunteer Fire Department, TIERS Ambulance, or Christ Episcopal Church, Clayton. Arrangements are entrusted with Cummings Funeral Service, Inc., Clayton and online condolences to her family may be posted at www.cummingsfuneral.com .

Report to administrator
#11 Gail Christensen 2022-11-21 18:55
Sue was absolutely brilliant and a gift to the community. She was selfless with her time to many organizations. Not only did I learn a lot from her, she made it fun, and did it with class. Sue will be missed.
My condolences,
Gail
Report to administrator
#10 Dean Moffatt 2022-11-17 20:12
Dan and family, Deepest sympathy at the passing of Sue. She is now in the loving hands of our heavenly Father. Was not aware she had been ill. I spend most of my time with Becky at Samaritan Summit. Don,t know all the local news. Give our best to all the family.
Report to administrator
#9 Bernel Kempney 2022-11-17 10:25
Alan, Tom, Fred and Grant Family, I am sorry to learn of Mrs. Grant's passing. Remember all of the good times. God Bless you all, Bernel
Report to administrator
#8 Scott Liebman 2022-11-16 15:18
Fred - and the rest of the Grant clan - my deepest condolences on the passing of your mother.
Report to administrator
#7 John Penrose 2022-11-16 14:54
Fred/Al- I am saddened to learn of your Mom’s passing. She was certainly an enthusiastic and energetic supporter of your academic pursuits. I was fortunate to have known her. God bless you and your families.
Report to administrator
#6 Leslie Varner 2022-11-16 11:19
Tom , Cindy and Family,
I am so sorry to hear of your Mom's passing. I remember her as a sweet lady. Only seeing her briefly in the mornings when I worked at the pharmacy. My hear is with you all during this sad time.