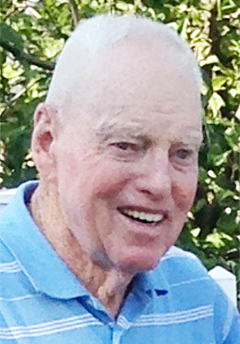 James was born in Auburn July 12, 1931, son of James C. and Elizabeth Hutchinson Jacobs. He was a graduate of Auburn East High School and attended Auburn Community College for one year. He then entered the US Marine Corps in 1951, serving actively for two years, which included Korea and remained in the Active Reserves. He was reactivated for Desert Storm, serving in Saudi Arabia. He retired as a Chief Warrant Officer 4 from the Reserves in 1991 . He received numerous awards including the Navy Achievement Medal and Navy Commendation Medals while in the Marines.

James worked 31 years for NY Telephone Co. from 1954 - 1985 and retired as line foreman. He was a life member of the Marine Corps Reserve Officer's Association. The Marines and his grandchildren were his life.

A celebration of James' life will be Saturday, October 29, at noon at Clayton American Legion Post 821. Arrangements are entrusted with Cummings Funeral Service, Inc., Clayton and online condolences to his family may be posted at www.cummingsfuneral.com. In lieu of flowers donations in his name may be made to the Clayton American Legion Colon-Couch Post 821, 518 Riverside Dr., Clayton, NY 13624.

#1 Heather Craddock 2022-10-12 20:22
My thoughts and prayers to you Brenda and family for your loss. You and Jim treated us like family. We will miss his little stories and pieces of advice.
Love, Heather, Terry and Kyle
Report to administrator
Refresh comments list