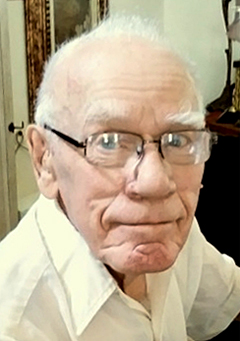 Clark Henry Babcock of Clayton passed away Friday, September 9, 2022, surrounded by family and friends at his home, one month shy of his 99th birthday.

Clark was born October 8, 1923 in Tylerville to Jesse and Florence Babcock. He graduated from Adams Center Central School in June 1941 at seventeen years old, and at the request of his high school coach, he played one final season of football prior to turning eighteen when he enlisted in the Army Air Corps.

Clark entered the service at Fort Dix, NJ on December 2, 1941. He graduated from the Air Corps Technical School in May 1942 and worked on the Boeing Flying Fortress B17 at Sheppard Field, TX. During World War II, he was stationed in the Philippines and flew as an aerial engineer with the 13th Bomber Command in the Pacific Theater. Clark loved flying and earned his student Pilot license in July 1944. He was honorably discharged from the Army Air Corps in January 1946 at Fort Dix. He received the American Defense Service, American Service, Asiatic Pacific Service, Good Conduct, and World War II Victory Medals.

After the service, Clark married Betty Lane, of Henderson, on June 22, 1948 and together they hauled coal from Pennsylvania to New York in Clark's beloved International. Following that, he worked as a Union Welder at snow plow manufacturer Frink American in Clayton. Then, for seven years, he managed Zenda Farm, a beef cattle farm and creamery in Clayton on the St. Lawrence River. Finally, Clark began work at the NY Air Brake Foundry in Watertown as a machinist where he stayed until his retirement in 1988.

There are no services or calling hours at Clark's request. His family request any donations in his name be made to Hospice of Jefferson County, 1398 Gotham St., Watertown, NY 13601, who warmly and ably provided care in his final hours. Arrangements are entrusted with Cummings Funeral Service, Inc., Clayton and online condolences to his family may be posted at www.cummingsfuneral.com.