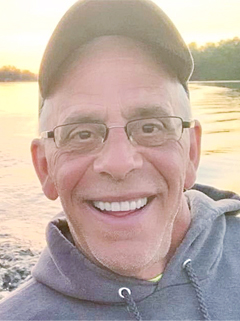 Although he wanted to fight like a muskie on forty acres shoals, Matt Eppolito lost his short battle with the demon cancer on July 27, 2022 at age 60, and has moved on to the sacred fishing grounds above. He made the decision to no longer try and tackle the disease so that he could enjoy the rest of his days on earth pain free and surrounded by love.

Whether you knew him as Matt, Eggy, or the Champ, you had the opportunity to know one of the kindest, most generous, hardworking, and funniest people around. His family was his number one priority and he took the jobs of husband, father, and sibling to heart. He and Lisa managed a crazy and hectic household of six children, and multiple dogs, and shared the laughter and joy that kind of madness brings to your home. Four of the children he raised were his own, and two he treated and loved like they were. Collectively they gave Matt the joy of being a grandparent eight times. He simply adored every one of them, and would play and wrestle with them like the child he always was at heart. His love for his wife was evident any time you saw them together. They enjoyed each other's company whether they were out on the river, at a concert, tailgating at a Bills game or just teasing each other at their home on Route 12. Their love was infectious.

Eggy developed a love of life early coming from a large, close family himself. He was involved in sports at all levels and excelled at football, hockey with the Pirates and Hackers, and golf. He was an avid fisherman/hunter and looked forward to going to camp, or muskie fishing on the St. Lawrence. One of his proudest fishing moments was when he landed 3 muskies in a single day. Eggy enjoyed a good concert, especially at the State Fair. He would always be that one guy pumping up 20,000 people to cheer on the rock on roll, wearing a crazy hat, and clapping his hands overhead!

One of the other blessings he brought to life was his willingness to always help those in need. By trade, he was mechanically inclined. He relentlessly served as his brothers and sisters as mechanic, general contractor, electrician and muscle. If a friend needed something built, moved, repaired or modified he would be the first one to stop by and take a look. Whenever anyone was in need there was only one place to turn.

In his professional career Matt belonged to the IBEW L.U. 910 as a Journeyman Electrician. His work ethic and task-oriented approach was respected and revered no matter the job he was on. He wanted things done in a timely manner, meaning it had to be done CHOP CHOP! His many other sayings have been immortalized on tee shirts and in the hearts of his coworkers who honored him recently at his family property on Grindstone, and treated him like the Godfather!

The profound effect he had on the people he came in contact with was never so evident than at the benefit held in his honor at the Clayton Fire Hall. The outpouring of love and support from the entire community overwhelmed him to the point that he commented, "I must not be that bad of a guy after all!" He and his family made the choice to live in this community because of the people he shared it with.

Eggy's wish was to not have any funeral service or calling hours, and that you hold your memories of him close to your heart. He did however, insist that at some point you get together and have a party to celebrate his life! The family will figure out when that will be and will look forward to sharing stories and a few laughs.

Arrangements are entrusted with Cummings Funeral Service, Inc., Clayton and online condolences to his family may be posted at www.cummingsfuneral.com. In lieu of flowers, he also kindly requested that donations be made to Hospice of Jefferson County. The care they provided makes them all angels on earth.

12
#20 Kurt McKean 2022-08-02 08:54
Eggy, you were the best of everyone! From the days of coaching us in hockey, to the later years of your love and robust sense of humor and kindness. Gonna miss you champ you’re one of a kind. Prayers to the entire Eppolito family, it was a blessing that I was in Clayton on July 9th to see my old friend. RIP Eggy!
Report to administrator
#19 Rita Walldroff 2022-08-01 21:24
Dear Eppolito Family,
We are keeping you in our prayers during this difficult time. It sounds like you have some wonderful memories to hold onto. Sincerely… Rita and Marcus
Report to administrator
#18 Catherine Ingerson 2022-08-01 12:06
So sorry for your loss.
Report to administrator
#17 Dennis Honeywell 2022-07-30 19:53
Ah Eggy…you always were ready with a laugh and a great smile. You and the whole Eppolito family welcomed my family to the Clayton community with open arms. We loved you for that. I’m glad to have had you as a friend.
Report to administrator
#16 Jazsi Lewis 2022-07-30 13:49
Although he wasn’t my biological father, he was still Dad to me. I don’t think I’d be able to call him any other name if someone paid me to. He was always full of laughter and tough love. When we were kids, He let us have sleep overs and giggle into the night even though the house was full. When they let us make dinner for the family, he’d always joke and tell us not to burn the place down. Even though those moments may seem small, they’ve always been big to me. I’m so sorry to the Eppolito Family for their of strong, loving, and supportive member of their family. He will surely be missed
Report to administrator
#15 William Salisbury 2022-07-30 10:53
So sorry to hear of your passing Eggy.
You were a great guy. You will be missed by all.
Report to administrator
#14 Deb Morgia Phinney 2022-07-30 09:07
Lisa, my heartfelt sympathy to you and your family.
Deb
Report to administrator
#13 ANDREW BAZINET 2022-07-30 08:18
Wishing the Eppolito strength during this time. RIP Eggy.
Report to administrator
#12 John W. Garnsey 2022-07-29 17:08
I am so sad to hear of Eggy's passing. Deepest sympathies to the entire Eppolito family. As kids, we played in the same baseball, and football leagues. Everyone wanted to be on his team, because he was so much fun to be around. Always having everyone laughing. Singing off key, jokes, having fun - that's what I'll always remember about Matt. "Roller"
Report to administrator
#11 Charles Stage 2022-07-29 14:51
A fighter indeed he was. Also, one of those 'River' personalities that many shall remember. I am so sorry for your loss. He will be spoken of in many conversations for years to come.
Report to administrator
12
Refresh comments list