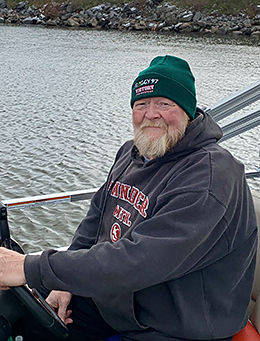 Gerald spent time working for Schell Dominy car dealership and St. Lawrence Restoration before beginning his career as a corrections officer for New York State Department of Corrections in 1987. He retired August 31, 2017 after 31 years of service at Cape Vincent Correctional Facility where he earned the nickname “G-Money” by his colleagues. After retirement, he spent time working on Grindstone Island as a caretaker for multiple families with his ”Unc” Harry Bazinet.

Gerald cherished time spent with his friends and family. He loved boating, fishing, and hunting with his sons and son-in-law. He was an avid sports fan, especially a lifelong Green Bay Packers fan and he enjoyed camping with his family. He was a member of the Watertown Elks Lodge 496 and the Knights of Columbus Council 350, Clayton. For many years he was ‘Papa Gerald’ to Colton and Zoe Jones, and became ‘Bop’ to his four granddaughters.

A celebration of Gerald's life will take place on Sunday, August 14, at the Watertown Elks Lodge starting at 2:00 PM. Arrangements are entrusted with Cummings Funeral Service, Inc., Clayton and online condolences to his family may be posted at www.cummingsfuneral.com. In lieu of flowers, donations in his name may be made to Hospice of Jefferson County, 1398 Gotham St., Watertown, NY 13601 or to a charity of your choice.

I graduated with Gerald and though I haven't seen him since then, My condolences go out to the family. I hope the memories keep him alive in your hearts. It sounds like they will.
Diane
Report to administrator
#38 Linda LaLonde 2022-07-18 21:28
Jody and all the family I am so sorry for your loss.
Report to administrator
#37 Charles Albertson 2022-07-18 20:43
My wife and I have had the pleasure ( sometimes ) of transporting Zoey from BOCES to home in the afternoon. She had such love for Pappa Gerald and couldn't wait every night for him to call or pick her up. He is leaving a massive hole in Zoey's life. I always knew him to be so caring and a genuine great grandfather to Colton and Zoey. Accept our deepest sympathy. Sue and Charlie
Report to administrator
12345
Refresh comments list