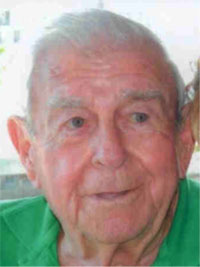 There will be a celebration of his life with an Open House at Sunny Banks Restaurant, NYS Rt. 12E., Cape Vincent on Sunday, July 28th, starting at 2PM and the tradtional "Arty's" fish fry at 5PM. Burial will be at the family's convenience in Sand Bay Cemetery. Arrangements are with Cummings Funeral Service, Inc., Clayton.

Arthur was a 55-year member of the Masons in Chaumont. He enjoyed fishing and for many years, he wintered in Boynton Beach, FL, including this past winter.

He is survived by his five children, Georgia Veith, Sandra and Michael Ivey, Mary Royal, and John and Rhonda Veith, all of Cape Vincent, and James and Corrine Veith, Newark, NY; nine grandchildren; six great grandchildren with one on the way; his sister, Mary and Albert Jones, Rochester; brother-in-law, John Goonan, Rochester; and several nieces, nephews, and cousins. His sister, Virginia Goonan, died before him.

In lieu of flowers, the family wishes donations in his name to either Hospice of Jefferson County, 1398 Gotham St., Watertown, NY 13601 or to Holy Childhood, 100 Groton Pky., Rochester, NY 14623 or online at http://www.holychildhood.org/. Online condolences to the family may be made at www.cummingsfuneral.com.