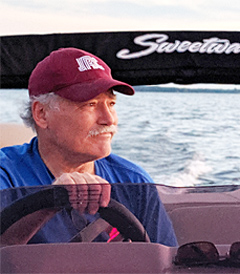 Born February 26, 1957 to Anne P. and Charles R. Sharlow Sr. Charlie dedicated his life to making a difference in others. He graduated from Watertown HIgh School in 1976, already working as a full-time manager at Caroll's restaurants. He enjoyed a successful career with Burger King in the Fort Lauderdale area, then built homes with his brother, John as Sharlow and Sharlow Contracting; Charlie especially enjoyed being an electrician and passing that knowledge on to homeowners and young people. He worked for Burger King in Watertown as well. He bravely stepped out of that role and attended college, graduating from SUNY Potsdam with high honors. He worked at Samaritan Medical Center for over 20 years, and was an EAP counselor for ASAC (Pivot) for 18 years. He also was a human services professional at the Jefferson Rehabilitation Center (ARC) and was a community outreach coordinator for the Jefferson County Children's Home. He was loved and respected by his peers and will be greatly missed.

Charlie was an avid boater, waterskier, and scuba diver. He also enjoyed playing softball in his Florida days. Most of all, Charlie loved being with his family. It was his life's delight and devotion. Charlie served the boards of The Resolution Center of Jefferson/Lewis Counties and The Lyme Community Foundation. He was a member of the Evans Mills Knights of Columbus and a communicant at Our Lady of the Sacred Heart Church, Watertown and All Souls Church, Chaumont.

After living in the Fort Lauderdale region of Florida from 1977 to 1985, Charlie returned home to Watertown, met his best friend and married her. Charlie and Christine (Bradley) Sharlow were married at Our Lady of the Sacred Heart Church in Watertown on September 12, 1987.

Charlie was predeceased by his father and mother, and his brothers Robert, William, Michael, and Thomas.

In addition to his wife, he is survived by two children: Eric Sharlow, Chaumont, NY and Annie DeMasi and husband Michael, Augusta, GA. He is also survived by his cherished grandchildren. Charlie was the foster father to Madeline Johnson (TN) and Emily Brown (TN). He is also survived by brothers Alfred "Chuck" (Antoinette) Sharlow, VA, John Sharlow, and James Sharlow, and wife Tammy, Chaumont, and sister Rosemary (Peter) Soules, VA. He is survived by numerous nephews and nieces who love him and will miss his boat ride adventures to "Tooth Fairy Castle."

Charlie liked to say that he "wore a lot of hats." He had his social worker hat, his manager hat, his electrician hat, his husband hat, his dad hat, and his favorite of all, his Grandpa Hat. Charlie loved teaching his grandkids all the joys of construction and boats. He will be forever remembered for his kindness to strangers, his sense of humor, and his dedication to making the world a better place.

123
#27 Sadaqat Khan 2022-05-07 11:54
Dear Mrs Sharlow and family,
I’m so sorry Charlie’s gone. My heartfelt condolences to you at this difficult time. Charlie was a colleague for more than 20 years, it was my good fortune to work with him. He was a dedicated man, thorough in his work, very diligent. His friendly manner, his kindness touched many lives, particularly those in crisis.
We had spoken on a couple of occasions just the other day last week, at work. It was terribly sad to hear of his passing, a couple of days later.
He is missed, and will be missed, his dedication, his caring, his humor, his generosity. To me, and I know to many others, Charlie’s unforgettable. May his love and memories nurture you during your grief and afterwards.
May he rest in peace.

Report to administrator
#26 Robin Hunt Thorne 2022-05-05 15:54
We are so sorry for the loss of your Husband, brother,father, grandfather. I still remember Charlie working at CCarols and Burger King. He will me missed. Robin, Dave, Khris, Mary.
Report to administrator
#25 Sheri Doroha 2022-05-04 19:19
Chris and family, I am so sorry for your loss. Charlie was an awesome man and loved him dearly. My thoughts and prayers are with you and your family.
Report to administrator
#24 Megan Schilling 2022-05-04 11:33
Aunt Chris, Eric and Annie. Tony and I are thinking of you all. We enjoyed the visits with Uncle Charlie when we lived in Georgia. Love to you all.
Report to administrator
#23 F&L Kisselstein 2022-05-04 08:12
Sorry to hear of Charlie's passing.I enjoyed talking to him at Camp on Barnes Bay.
Report to administrator
#22 Steve Bradley 2022-05-03 23:04
Charlie,
You were an awesome Uncle to my kids and a great great Dad and Grandpa. The job you did raising my
Godson(and nephew) is a great example of what your life represented! There are very few men that hold a candle to the type of Man that Eric has become with your guidance and fatherly influence. I can assure you that your grandkids will know who you are through all the people you have left here to carry the torch for you. Sleep peacefully, Brother, we will take it from here.
Report to administrator
#21 Kathie Redder 2022-05-03 21:27
So terribly sad to hear of Charlie's passing. I first met Charlie in the ER at SMC where we shared office space. As i read his obituary I thought that was definitely Charlie. He would talk about his boat and grandchildren and was always looking forward to anytime spent with them. He looked forward to sharing with them all that he had learned so that they would have those skills later in life. He talked about the restaurant business and shared so many of his experiences with me. He was dedicated to the patients he interacted with, Always a gentleman and kind to everyone. He always greeted me as Miss Kathie. I will miss his smile and the true genuineness of the man.
Report to administrator
#20 Lori Hanno 2022-05-03 09:48
Charlie was such a special man. I enjoyed visiting with him during our days at SMC. My heart breaks to learn of his passing. You were one of the best.
Report to administrator
#19 STEVEN THOMAS 2022-05-03 09:05
I first met Charlie when I worked at Watertown Builders he came in with John working on some project . Charlie was kind of silly talking with Pete Smithers joking around . When we would have a chance to see each other somewhere he always had a smile and greeted me with kindness . When my friend's Dad Donald Heise past at Samaritan Hospital Charlie was the councilor who came out to comfort the family , what a blessing to have someone there I knew to help the family when Donald past . I am hoping that your family knows how much he meant to me for this kind, caring man, with a gentle spirit who brought joy to my day when he walked into where I worked . Thank you John for bringing him with you to WBS . Sorry to hear he left us behind to be with our LORD and SAVIOR , JESUS CHRIST : Love Steven Thomas
Report to administrator
#18 Donna MacPherson 2022-05-03 08:08
Chris, I am so sorry to hear of Charlie's passing. You and your family are in our prayers. He will be missed by so many and there are many wonderful memories to cherish.
Report to administrator
123
Refresh comments list