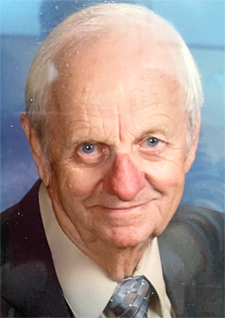 Charles F. Burdick, 91, passed away at home surrounded by family on April 11, 2022. Born in Watertown on April 7, 1931, to Wellington (Bud) and Edith Burdick, he grew up in Cape Vincent and later moved to the north side of Watertown, graduating from Watertown High School in 1949.

He married Virginia Rose Puccia on July 21, 1951 at St. Anthony's Church in Watertown. Over the summer, they celebrated 70 years of marriage with their family and friends. Whenever you asked Charlie how long he has been married, he consistently replied, "not long enough."

He proudly served his country with the United States Army, receiving an honorable discharge in 1954. He was a life member of the American Legion Post 61 and the Veterans of Foreign Wars Post 1400. For many years you would see him at ceremonies honoring those who served.

As a communicant of St. Anthony's Church his whole married life, he was always available for Friday night bingo, helping out at the Mt. Carmel Feast, and proudly serving as an usher during Sunday morning mass.

Charlie's passion, outside of the love of his family, was sports. He and his friend, Edward Prevost, coached the Pepsi-Cola little league baseball team in the mid-to-late 50's and he continued to coach when his son played. Charlie was always ready for a game of catch with anyone who asked and happily attended all of his grandchildren's activities. He could readily provide sports trivia on the fly, and was a die-hard Syracuse Orange and Dodger's fan.

Charlie and Virginia enjoyed making memories with family and friends at their cottage on Lake Ontario. From May through September, you would find everyone there enjoying life.

The family would like to thank Father Donald Robinson, Father Michael Demo and Hospice of Jefferson County for all of their help and support during these last few months.

A funeral mass will be held on Monday, April 18, 2022, at 11:00 am at St. Anthony's Church with burial and military honors immediately following at Glenwood Cemetery. Arrangements are with Cummings Funeral Service, Inc. In lieu of flowers, donations can be made to St. Anthon's Church, 850 Arsenal St. and/or Hospice of Jefferson County, 1398 Gotham St., both in Watertown, NY 13601 in memory of Charles Burdick.