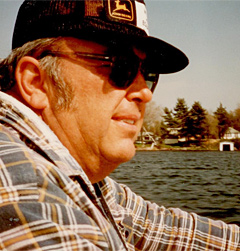 Floyd was born on Wellesley Island February 15, 1935, son of the late Frederick Jay and Sarah Reome Waterson. He attended school on Wellesley Island and in Waterloo and LaFargeville. On June 7, 1953 he married Iris J. Reed at Clayton United Methodist Church.

He worked for Carr & Bitz, Depauville erecting telephone lines throughout the north country and for Knudsen and Knudsen near Waddington and Massena doing construction work building the St. Lawrence Seaway. He then began his 33 year career with NYS Dept. of Transportation, retiring as an equipment manager. After Floyd's retirement, he worked part time for John Eckert Construction, Thompson Quarries, and Caskinette Auto Sales.

Floyd attended Omar Methodist Church. He was a member of Fishers Landing Fire Dept. and was a former chief and member of LaFargeville Fire Dept. He was a member of Fishers Landing Racing Club, Mid State Antique Stock Car Club, and American Power Boat Assoc. He enjoyed vintage hydroplanes, owning two. In his youth, Floyd enjoyed growing up "down in home" on Wellesley Island, now known as Waterson State Park.

Along with his wife, Iris, Floyd is survived by his three children and their spouses, Robert D. and Cynthia, Wellesley Island, Ronald G. and Charlotte, Fishers Landing, and Lori J. and Dean Neumann, Clayton; three grandchildren, Kyra McGrath and husband Brian, Ft. Lauderdale, FL, and Reed and Claire Waterson, Denver, CO; brother-in-law Douglas Reed; sister-in-law Karen Reed LaFave; and several nieces nephews, and cousins. Floyd was predeceased by a sister in infancy and a brother and his wife, George L. and Nancy Waterson.

Services will be held at his family's convenience. Arrangements are entrusted with Cummings Funeral Service, Inc., Clayton and online condolences to his family may be posted at www.cummingsfuneral.com. In lieu of flowers, donations in Floyd's name may be made to T. I. E. R. S., P. O. Box 524, Clayton, NY 13624, or Fishers Landing Fire Dept., P. O. Box 23, Fishers Landing, NY 13641.

12345
#49 Kelly Meisch 2022-03-18 18:53
What a life well lived! I have such wonderful memories on the island with him. He always made me laugh even if it was unintentional. Family dinners on the island were some of my favorite river memories. No one could make Kyra and I laugh like he could. He will be missed. My thoughts and prayers are with you all!
Report to administrator
#48 Kyle Barton 2022-03-16 16:09
To all the Waterson family
So very sorry to hear of Floyd’s passing
You are in our thoughts and prayers