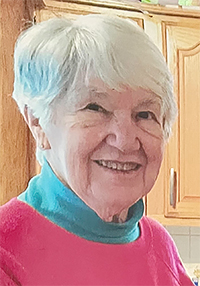 After her marriage, the couple moved to Goshen where she taught at Goshen Elementary School for 33 years. The couple wintered in Bradenton, FL and moved to Clayton in 1987. She was a substitute teacher in the Clayton and LaFargeville school districts as well for BOCES. She also was a hostess at the Admirals' Inn, Alexandria Bay. Theresa was a communicant of St. Mary's Church and a member of the Traveler's Club, Clayton. She enjoyed playing Bridge and quilting..

She is survived by her daughter and her husband, Barbara H. and Michael B. Bresnahan, Alexandria Bay and FL; two grandchildren, Patricia and Michael Bresnahan; two great-grandchildren, Amelia and Chauncey Bresnahan; and several nieces, nephews, and cousins. Theresa was predeceased by her husband Richard, April 29, 2021; two brothers, Dennis and Paul Cheney; and three sisters, Lila Bigwarfe, Florence DeWitt, and Thelma Ottersland..

Theresa was proud to be a donation to science. A memorial mass will be held later in the year. Arrangements are entrusted with Cummings Funeral Service, Inc., Clayton and online condolences to her family may be posted at www.cummingsfuneral.com. In lieu of flowers donations in Theresa's name may be made to either St. Mary's Church, Clayton or St. Cyril's Church, Alexandria Bay.