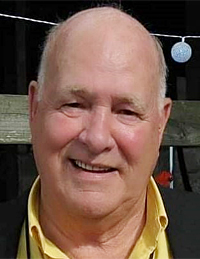 Terry K. Gehring passed away peacefully with his family at his side on January 15, 2022 at Samaritan Medical Center, Watertown, after a brief illness.

He was born on July 17, 1941 in Watertown to John J. “Jack” Gehring and Anne G. Gehring. He graduated from Watertown High School in 1959 and attended journeyman training at IBEW Local 910 and became a lineman for Donovan Construction Co.

He married Barbara J. Buican at Holy Family Church, Watertown, on August 31, 1963. Terry loved Barb from the age of 13 and courted her by stepping on her white Keds while walking to South Junior High School. They enjoyed going to dances, playing cards and going to Southwick Beach. He later proposed after a day on the water at Wilson's Bay by saying, "Maybe we should get married?"

Terry worked for Donovans until 1988 and then worked at various construction sites through IBEW, such as building the new base at Fort Drum and Nine Mile Point. He retired in 1999, and he and Barb began traveling. He never met a beach that he didn't like! He would pour over maps and tour books over the winter to find the perfect vacation spot. They traveled every year to tropical destinations and loved places such as Aruba, Dominican Republic, Jamaica, and Mexico, and made repeat trips to the best islands. The best part was when they got home and shared their vacation stories with "the kids."

Terry loved the water and was a lake kid starting in the early '40s when his parents built the family cottage on Pillar Point. He spent every weekend of his summers there. He loved to fish with his brother and go boating whenever possible. He built a new cottage on the property and spent countless hours there with his family and found great joy in riding his jet skis, swimming, sitting in the sun and mowing the lawn, which he was pretty passionate about.

Terry loved cars and motorcycles from a young age and delighted in telling stories about all of his vehicles. He had a fondness for Mustangs and Corvettes and owned several of both over his life. He spent four years restoring a 1964 Corvair for Michele so she could have it when she got her license.

Over the years, Terry enjoyed snowmobiling at his grandparents' farm in Champion, motorcycling with the Donovan crew, hunting (deer, ducks and geese), golf, and trapshooting. He also loved going to car shows, antique shows and flea markets and collecting marbles and Hot Wheels, a hobby he shared with his son in-law, Tim.

He loved dogs, especially Labs and after Pepper and Sandy, he loved Michele's dogs, first Bailey and then Josie. He loved watching Bailey swim out to the jet skis when we rode in and was a little disappointed that Josie was a wader, and not much of a swimmer.

Terry loved to laugh and have a good time and knew people wherever they went. He loved his family and friends fiercely and would do anything to help anyone in need. He was a "go-to" for anything that needed to be fixed. He loved to putter in the basement and have some kind of project to work on. He rarely sat still unless a John Wayne movie was on.

He was growing into his new role of being great grandpa, to Elena, who was born in September of 2020. He looked forward to seeing her every chance he could get and was so thrilled to see new pictures and videos of her milestones. His face lit up at the mere mention of her name.

In lieu of flowers, contributions may be made in Terry's memory to the Northern New York Community Foundation, 131 Washington St., Watertown, NY 13601. Services will be held at the convenience of the family. Entombment will be at Glenwood Mausoleum. Arrangements are entrusted with Cummings Funeral Service, Watertown, and online condolences to the family may be posted at www.cummingsfuneral.com.