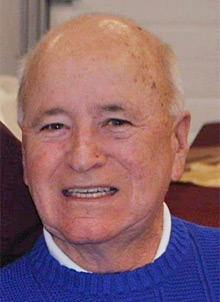 Rex Albert Buker, 86, from Clayton and formerly San Antonio, FL, passed away at his home in Clayton on January 1, 2022 with his family by his side, along with his wonderful caregivers.

Rex graduated from Copenhagen High School and later attended Clarkson University. He served in the US Army Reserves, with an Honorable Discharge in April 1961. His early career in the grocery business began with Loblaws, North Syracuse, NY where he met Betty Jean Daily, his future wife of 61 years. Later working as a store manager for Grand Union Supermarkets he was transferred to Alexandria Bay, NY, where the young family fell in love with the 1000 Islands. In 1966 Rex was offered an opportunity to buy a "Big M" supermarket franchise, moved his family to Clayton, and opened the Clayton Big M in 1967. A few years later Rex opened another Big M in Alex Bay, later selling the business to his brother-in-law, John Daily. In 2012 the business was sold and is now known as the Clayton Surefine Supermarket.

Rex was an avid sportsman. He loved spending time at his hunting camp on Cooks Pond in the Adirondacks. He was a long time member of the Cranberry Lake Fish and Game Club. He especially loved deer hunting with his father, brothers, and his sons. Rex enjoyed watching his children and grandchildren sports events, including in this last year watching hockey games through online cameras.

Rex and Betty loved to travel, going to many hockey games while their kids were growing up in the States, Canada, and Europe. They especially loved their trips to Colorado as long as they stayed out of the mountains, and the beaches of Aruba.

In San Antonio, FL, Rex was one of the original participants with a local "golf cart" First Responders group, volunteers that assisted in emergencies before EMTs could arrive. He was active with the San Antonio Methodist Church's men's group, which raised funds for bikes for children, contributed to the local food pantry, and other worthwhile projects in the San Antonio area, joined a group from the Church to build homes in Costa Rica. He was recognized by the Florida Sheriff's Youth Ranch group as an avid supporter. Rex volunteered several years in Tampa at the Outback Steakhouse Pro Am.

A memorial service will be held at a future date to be announced by the family, with burial at the Clayton Cemetery. Arrangements have been entrusted with Cummings Funeral Service, Inc., Clayton. Online condolences may be posted at www.cummingsfuneral.com. In lieu of flowers the family would ask that donations be made to a local charity of your choice, Alzheimer's Association of Central NY, Franklin Square Station, Box 12226, Syracuse, NY 13218, or Hospice of Jefferson County, 1398 Gotham Street, Watertown, NY 13601.