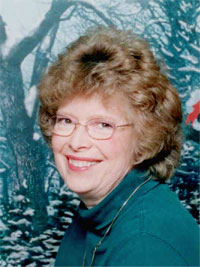 Cheryl J. Hockey, 66, Farr Rd., Clayton, passed away Thursday afternoon, June 13, 2013, at her home under the care of her family and Hospice of Jefferson County.

Calling hours will be held at Cummings Funeral Service, Inc., Clayton on Wednesday, June 19, from 4 - 7PM. The funeral service will be at the Depauville United Methodist Church on Thursday, June 20, at 11AM with Pastor Donald Briant officiating and burial will be at the convenience of the family in Clayton Cemetery.

A marriage to James John Robbins ended in divorce. She married Lawrence C. "Larry" Hockey in December 1983 in the town of Pamelia.

Cheryl worked with her father at Hutchinson's Clam Bar, Clayton. She worked at Crowley Foods, LaFargeville and then was a retailer in the PX on Ft. Drum.

She was a member of the Clayton United Methodist Church and attended the Depauville United Methodist Church. She was a member of the American Legion Auxiliary in LaFargeville and was a member of several bowling leagues at Seaway Lanes and Brunswick Bowl, both in Watertown. She enjoyed baking, especially baking cakes for her friends and family. Cheryl also enjoyed crocheting, card playing, dancing, traveling on motorcycles, and was a movie buff. She enjoyed boating, the St. Lawrence River, and cruises up the Rideau Canal.

Besides her husband, Larry, she is survived by her son, John G. Robbins and his fiancee, Renay Aarons, Dexter; her daughter and her husband, JennieLynn and Kenneth Bond, Clayton, children from her first marriage; 3 step children, Danny and Debbie Hockey, Watertown, Tim Hockey, Clayton, and Charlene and Dennis Spina, Skaneateles; 5 grandchildren, 7 step grandchildren, 4 great grandchildren, and 8 step great grandchildren; and several nieces, nephews, and cousins. Along with her parents, she was predeceased by her brother, Ralph J. Hutchinson, who died September 5, 2003.