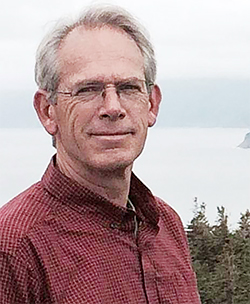 Dave was born in Rochester November 19, 1955, son of Gene and Mary (Williams) Smith. He received his BS from the College of Environmental Science & Forestry, Syracuse and attended the graduate program at Cornell University. On September 9, 1989 he married Heidi Claussen in Cooperstown.

Dave was very dedicated to the Clayton United Methodist Church, acting as trustee, caretaker and choir member. His faith and church family were profoundly important to him.

David first and foremost was an amazing father, husband, son, brother and friend to all he touched. He was an avid sportsman, competing in bicycle and cross-country ski races, always landing in the top of his class. Dave was a jack-of-all-trades; carpenter, landscaper, architect, and perfectionist. The vegetable garden was a great source of pride for him and his wife. An impassioned outdoorsman and conservationist, he enjoyed hiking, camping, and annual hunting trips to the ADKs.

Dave was very involved in community youth sports, leading the Clayton Youth Commission for several years. His passion was coaching soccer, and watching his sons play. This quiet, gentle man was all BUT when watching his sons compete on the soccer field, often disagreeing with ref’s decisions.

Dave dedicated his professional career to the care and management of the New York State forest lands he loved so much, culminating as the top DEC forest manager in the western Adirondack and Tug Hill regions. As Regional Forester, Dave guided the professional forestry team in DEC’s Region 6. Among his many achievements is the advancement of the conservation easement program which grew to protecting 400,000 acres as working forest lands, including the Long Pond, Tug Hill and Cranberry Forest Conservation Easement tracts. The Tug Hill Tomorrow Land Trust recognizes the contributions Dave made throughout his career to the Tug Hill region, and will soon be dedicating a conservation area in Le Ray in his honor.

A memorial service will be held at a time and date in the spring of 2022 at Clayton United Methodist Church followed by a celebration of Dave's life and tree planting at the family farm. Arrangements are entrusted with Cummings Funeral Service, Inc., Clayton and online condolences to his family may be posted at www.cummingsfuneral.com. Donations in Dave's name may be made to either the Clayton United Methodist Church Organ Fund, 324 John St., Clayton, NY 13624 or to www.lustgarten.org for pancreatic cancer research.