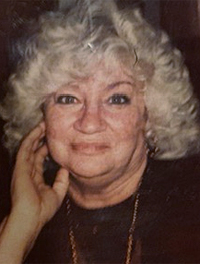 Joan was born in Watertown April 27, 1934, daughter of the late Harold and Margaret (Turcott) L'Huillier and she was a 1952 graduate of Watertown High School.

Joan was a waitress for over 50 years, working for McCormick's Restaurant, Clayton, Foxy's, Fishers Landing, and Half-Way Chalet, Sand Bay. She also was co-owner of her husband's store and the Cedar Chest, Clayton.

Joan enjoyed playing every sport imaginable, including Powder Puff car racing, baseball, bowling, golf, and gambling. She was an avid Yankees, Giants, and Packer fan. In 1974 Joan and Art took over the Duck & decoy Show in Clayton, they were patrons of the Thousand Islands Museum, and were Clayton Citizens of the Year in 1989. She was a member of the American Legion Colon Couch Post 821 Ladies Auxiliary.

As per her wishes, there are no public services. Burial in Clayton Cemetery will be at her family's convenience. Arrangements are entrusted with Cummings Funeral Service, Inc., Clayton and online condolences to Joan's family may be posted at www.cummingsfuneral.com. In lieu of flowers donations in her name may be made to the Thousand Islands Museum, PO Box 27, Clayton, NY 13624.

123
#27 Catherine Main 2021-12-25 10:45
I babysat for Art and Joan's kids for several years and appreciated how sweet the kids were and how kind Art and Joan were to me. My Dad and Art worked together at Ni-Mo for years as well. I am so very sorry to hear of Joan's passing.
Report to administrator
#26 Tim LaLonde 2021-12-19 23:06
Art and family-
So sorry to hear of the loss of your mom. I remember her as a person full of life and always being upbeat.
You are in my thoughts.