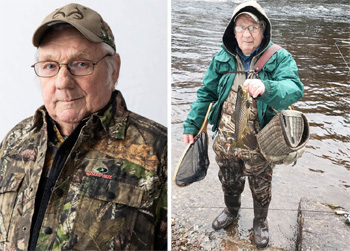 He graduated from Watertown High School in 1963. He was a member of Jefferson Community College's first graduating class in 1965 and then graduated from Oswego State University in 1968. He was initiated into Plumbers & Steamfitters Local 117 Watertown in 1970. After his completion of the five year apprenticeship program, he worked as a plumber, pipefitter, pipe welder, and foreman supervisor on many schools, hospitals, industrial, cogeneration, and nuclear plants plus the Fort Drum Expansion. He was well respected by his peers. He retired from UA Local 73 on May 1, 2010 after 50 years of service.

Richard was a 53 year member of Oswego Elks Lodge 271, a member of Alexandria Bay Masonic Lodge 297, and a life member and former board of directors of The Mad River Club, Boyleston.

Richard's love for the outdoors started as a toddler by his father Harry Brock at Cranberry Lake. Over the years he perfected his hunting and fishing with an emphasis on treating the outdoors and nature with respect, forming a bond at one with the natural world which he passed on to his family. To him the opening day of trout season (April 1) was a national holiday. On April 1, 2017, a few weeks following some heart issues, he and Darien went to the same spot. After a few casts Richard hooked on to a beautiful brown trout and as he told the Times, "It's a life sharing experience. It's minutes, hours that you're spending time together, not rushing off in 90 directions. It's shared time." Faith and looking on the bright side were traits that he had when speaking to others. He was a gentleman and a friend to all who knew him.

Richard is survived by his loving wife Cathy; son Darien W. Brock and wife Jessica, Watertown; grandson Brantley; granddaughter Morgan; and numerous nieces, nephews, and cousins. He was predeceased by two brothers and one sister.

Calling hours will be held on Thursday, December 2, at Cummings Funeral Service, Inc., Watertown from 4 - 7 PM. The funeral service will be held at the funeral home on Friday, December 3, at 11 AM followed by burial in Brookside Cemetery. Donations in Richard's name may be made to The Mad River Club, P. O. Box 171, Pulaski, NY 13142. Online condolences to his family may be posted at www.cummingsfuneral.com.