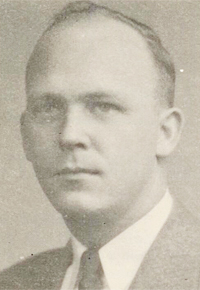 Kenneth Frank Rogers, 95, of Watertown passed away Monday, October 18, 2021, at Carthage Center for Rehabilitation and Nursing.

Ken was born on August 5, 1926 in Chaumont, the son of Frank W. and Ruth Gillan Rogers. He attended Watertown schools and graduated from Watertown High School June 22, 1944. He entered the US Navy July 12, 1944, graduating from Naval Corps School in San Diego, CA. Ken served in the Plastic Surgery and Burns Unit at Oakland Naval Hospital and was released from active duty on July 22, 1946.

He completed two years of PreMed at Sampson College in CA, then transferred to Syracuse University. He became a member of Sigma Beta fraternity and president of his pledge class (later Alpha Tau Omega). He was active in SU's intramural basketball and softball programs. After completing one year, Ken was recalled to active duty during the Korean War. He spent eighteen months at Scotia Naval Supply Depot and was again released from active duty September 3, 1952. He was honorably discharged from the US Navy July 12, 1954, completing ten years of active and inactive duty as a Hospitalman Second Class.

On June 19, 1954 he married Lillis M. Sophy at the Congregational Church, Ogdensburg with Rev. Edward Sizeland officiating. She died March 7, 1989 a day after her 59th birthday.

Ken spent fifteen years in Production Control and Planning at NY Airbrake, beginning in October 1952 and served as president of the NY Airbrake Management Club in 1958.

He was appointed Supervisor of the 12th Ward on July 1, 1959, serving eight and one half years and was Chairman of the Board from 1966 to 1967. He left both the Board of Supervisors and the NY Airbrake December 31, 1967 and became Jefferson County Treasurer January 1, 1968. Ken resigned in June 1988 after almost twenty years serving Jefferson County.

Ken was office manager of the American Red Cross for six years and also transported blood from drives held in Jefferson and Lewis counties to Syracuse. He was a life member of the Northside Improvement League and American Legion Post 61. He was a past member of the Italian American Club and Elks Lodge 496. He was also a past member and past president of the Watertown Kiwanis Club, and was Lt. Gov. of the Ontario Division and Chairman of the NYS Kiwanis Public Relations Committee. Ken served on the Flower Memorial Library Board of Trustees for eleven years and was president for two years.

Ken served on the Hospital Service Corp. and Executive Committee. He was a member of the USO, Jefferson County Planning Board, Jefferson County Committee of Alcoholism, and the Black River-St. Lawrence Regional Planning Board, where he was president for two years. He was a past member of Watertown Masonic Lodge #49, the Fellowship Team, and Media Shrine - a 32 degree Mason. He was a member of the Boy Scouts of America on and off from 1939 - 2009. Ken served as president of the Jefferson-Lewis Council BSA for four years and received the Silver Beaver award in 1974. He last served on the Copenhagen Troop 60 committee during which time four of his grandsons became Eagle Scouts.

Ken received an Honorary First Citizen award in December 1963 in Watertown. He was chairman in September 1969 for the Centennial Celebration. He served as chairman of the Watertown City Republican Party for fourteen years, and served on the Thousand Islands Bridge Authority and the original Fort Drum Steering Committee. Ken was on the original committee for the formation of Jefferson Community College and was appointed to the North Country Regional Economic Council on May 31, 1984.

Ken enjoyed camping, gardening, and solving crossword puzzles. He was an avid fan of the NY Yankees, NY Giants, and all Syracuse University sports which he attended regularly.

A graveside service with military honors will be held Tuesday, October 26, at 10 AM at Brookside Cemetery with Rev. Bruce Chapman presiding. Arrangements are entrusted with Cummings Funeral Service, Inc., Watertown and online condolences to Ken's family may be posted at www.cummingsfuneral.com. Donations in his name may be made to the American Cancer Society, 1 Penny Lane, Latham, NY 12110.

I was so glad that my family and I were able to get back to Watertown in 2014 for family time and visits. Our sons only had pictures and my many stories. I’m so thankful we all, including dad, spent time with you and the family.

I always remember going over to your house in my younger year’s and playing hide-n-go seek outside with Mark and the girls, or some other activity. There was always those homemade talent shows in Grandma’s barn too. You always seemed to be bigger than life to me.

I know you are now with Aunt Lillis, Grandma/Grandpa , your brothers and of course dear sweet Allison. You had a great life, touched many and leave a legacy of helping/serving others. You have heard those words “well done my son” and now living an eternal life in our Lords house. How awesome is that.

Not good-bye, but see you soon. God Bless, a proud nephew, Jeff.